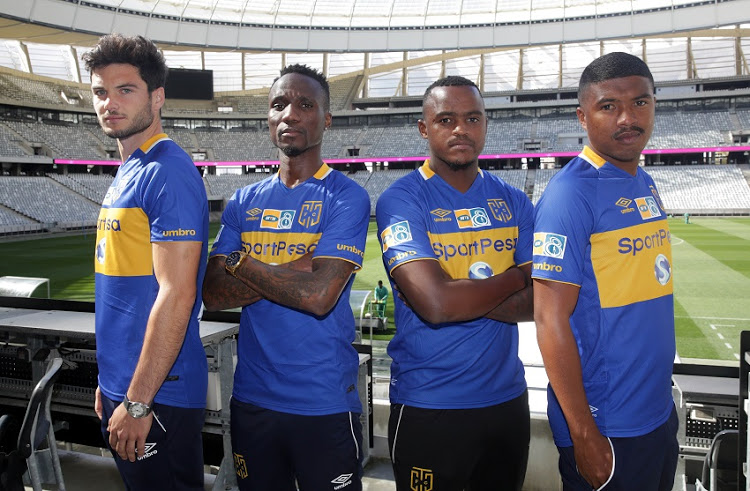 Cape Town City have found a sponsor for the next four years with betting company SportPesa adding the Premier Soccer League club to its stable of overseas clubs who wear their logo on their shirt.
Image: BackpagePix

The arbitration at the South African Football Association (Safa) by the Premier Soccer League (PSL) against Cape Town City for signing a sponsorship with sports betting company SportPesa will continue next on Monday‚ however this will not be a hearing.

A date for a hearing is expected to be set on Monday.

The arbitrator is also expected to press City for various documents that the club have so far not furnished in the matter‚ SowetanLIVE is informed.

This being a full-blown arbitration‚ club owner John Comitis and his outfit‚ in terms of the Arbitration Act‚ must provide their defences to the arbitrator beforehand‚ resulting in much paperwork to be completed.

However‚ City have apparently been dragging their feet on providing such paperwork.

City face the possibility‚ as a worst-case scenario‚ of expulsion or relegation from the PSL.

The PSL asserts that a resolution was passed eight years ago that no club would sign a sports betting company as a sponsor without permission until the league had carried out an investigation into the issue.

This investigation was never carried out.

City did not ask permission to sign the deal with SportPesa.

A charge of defiance in National Soccer League rules can see the club expelled if found guilty.

City have also continued to wear the SportPesa logo on their shirts‚ despite never having‚ as required by PSL rules‚ the kit approved by the league‚ and having been directly instructed not to.

This could result in City being deducted three points per game where they have worn the kit‚ and automatic relegation to the National First Division.

World football controlling body Fifa have received the Tendai Ndoro files from the Premier Soccer League (PSL) and are expected to rule on the case ...
Sport
4 years ago

Football fans took to social media on Wednesday to heavily criticise Kazier Chiefs‚ Orlando Pirates and the Premier Soccer League (PSL) for not ...
Sport
4 years ago
Next Article