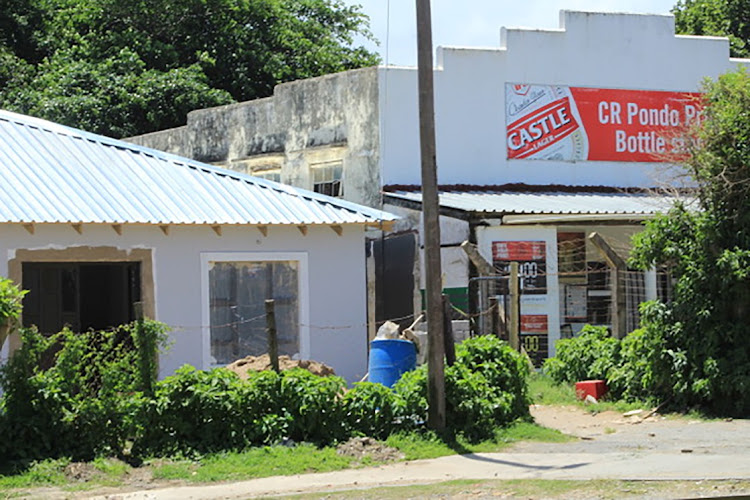 TOURIST TURN-OFFS: The Pondo Pride bottle store and the neighbouring tavern, which is currently being renovated for the festive season, are not only an eyesore on Port St Johns Second Beach, but also the source of alcohol for thousands who stream in every weekend for three-day, all-night parties on the beach, risking Covid, and leaving behind a profusion of plastic and broken bottles.
Image: Hoseya Jubase

Hundreds of metres of shattered glass underfoot. Used condoms floating in the ocean. Plastic bags and beer cans suffocating the lagoon. Every weekend thousands of people drinking and partying.

Welcome to Second Beach, the heart of the tourism area in Port St Johns, where a string of accommodation establishments battle to stay in business as those guests who do come are subjected to sleepless nights, being accosted on the beach by drunk people and cutting their feet in the ocean.

On occasion, residents and guests also hear gunshots, but there is no sign of the police, who cannot get through the traffic jam outside the taverns and bottle store on the beach.

On occasion, residents and guests also hear gunshots, but there is no sign of the police, who cannot get through the traffic jam outside the taverns and bottle store on the beach.

Now accommodation owners are left with no option but to warn potential guests of what to expect, and even then, many visitors demand their money back after one night.

More often than not, these guests leave before their checkout date and go elsewhere.

Real estate in the immediate area is plummeting.

To illustrate, a beautiful house overlooking the beach and bay that would fetch millions of rand in any other SA town has been on the market for more than two years. No-one wants to live there.

Second Beach is in all other respects a beautiful spot: cerulean water, safe swimming spots dotted along the bay and good fishing adjacent to the pristine Silaka Nature Reserve.

Even the road from the N2 to Port St Johns is new, giving no indication that one is in fact heading to an unkempt and lawless town.

President Cyril Ramaphosa announced a regional lockdown in the Nelson Mandela Bay municipality which was be implemented from midnight in an effort to ...
News
1 year ago

According to Juliet Leslie, a resident and property caretaker in Port St Johns for 25 years, the town has become “a living hell on weekends”, which she circumvents by leaving before the parties kick off.

Leslie said she had been “fighting this battle” for 10 years, even petitioning the municipality. But rather than anything improving, she now fears “gang involvement” in the area.

Drinking on a beach is illegal nationwide, and outside the former Transkei, there are few holiday towns where residents would tolerate this.

It should be easily rectifiable — a call from the premier of the Eastern Cape to the mayor and police of Port St Johns should be all it takes to put an end to this mayhem.

Instead, the bizarre situation is that there are lifesavers patrolling the beach warning people where not to swim while ignoring the fact that one can barely get to the ocean without shredding one’s feet on broken glass.

Residents blame a large bottle store and tavern not 10 metres from the beach.

Residents blame a large bottle store and tavern not 10 metres from the beach that is fronted by a large parking lot.

This also results in the road to accommodation further along Second Beach being blocked by traffic jams for days on end.

Most weekend revellers are not from Port St Johns and bring everything with them except alcohol, which is purchased on arrival at the beach. This basically means they do not bring any money to the town.

But their antics cost the accommodation and tourism sector hundreds of thousands of rand in respect of lost reservations.

Phelokazi Pellem, head of communications for the Port St Johns municipality, said on Monday that a committee was being formed to tackle the issue of the “bottle store and tavern on the beach”.

Yet at that exact moment the new, renovated tavern was being fitted with windows and doors in time for the festive season.

Once a trendy, bustling hub where foodies would congregate, Port Elizabeth’s Stanley Street is reeling as restaurants close for good because of the ...
News
1 year ago

A local community newspaper, Iphepha Lam, reported on Friday last week that Port St Johns mayor Nomvuzo Mlombile-Cingo in her response to a letter from residents of Second Beach and the Tourism Forum had promised to “attend to the matter urgently” and that she was “planning to have a meeting with ratepayers and the business sector very soon” to address their hopes to deal with the situation before the festive season gets into full swing.

This seems extremely unlikely as on Monday Cingo went on leave for two weeks and Pellem said she had not briefed the acting mayor on these promises. When attempting to confirm this, it transpired there is no acting mayor in place.

Furthermore, police appear to have no interest in resolving the situation, as is illustrated by a series of more than 20 messages sent by longtime resident Michael Gatcke to Port St Johns station commander Colonel Mthengelwa.

In these messages, Gatcke explains the situation is out of control with several thousand people on the beach drinking openly and music thumping until 7am every day.

These exchanges over a period of six weeks were all but ignored by Mthengelwa, who fobbed most of them off by requesting the resident to come to the police station.

“Just come to my office and discuss the matter and make suggestions for making a plan.”

Gatcke told him it should be a police matter.

The SA Medical Association has criticised the Eastern Cape health department for its 'severe' lack of leadership as coronavirus cases in the province ...
News
1 year ago

“I am working at the moment and cannot see you personally. Furthermore I believe there is no need for any further explanation from me — I have reported gross infringement of the law at Second Beach which has to be addressed as a matter of urgency.

“With all due respect, a personal discussion between you and me will not resolve the matter and the issues regarding the unlawful behaviour of perpetrators. It requires the urgent attention of SAPS to address the situation.”

More messages Gatcke sent to other SAPS officials and to the mayor and municipal manager have been ignored for more than three years.

The Dispatch made more than 30 phone calls to a number of SAPS numbers, both landlines and cellphones, over the course of a week. The vast majority went unanswered.

More than 40 calls to various municipal members yielded only one response — from Pellem.

All attempts to bring the situation to the attention of the provincial commissioner and the premier of the Eastern Cape were thwarted at every turn by their spokespeople.

Provincial SAPS spokesperson Brig Tembinkosi Kinana, was not even interested in hearing the questions, and spent the phone call insisting that the Dispatch may not quote the station commander’s responses to Gatcke or even speak to the commander.

DispatchLIVE has escalated the questions to national police level and awaits their response.