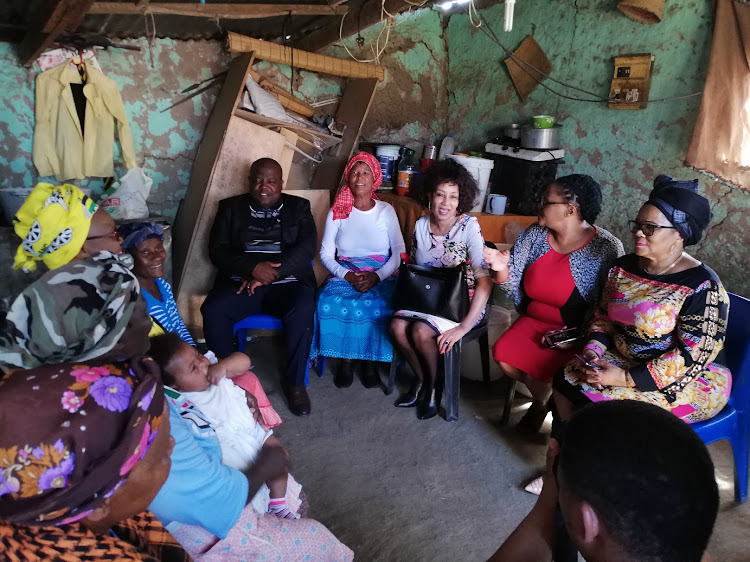 Just a few hours after snuffing the dreams of Chippa United head coach, soccer boss Siviwe "Chippa" Mpengesi made the dreams of the Moni family come true when he donated a fully-furnished house on Monday.

But when he arrived at Buthulo Village, near Port St Johns, Eastern Cape, the worry that comes with owning a soccer team seemed far from Mpengesi's mind.

If anything, he was in a giving mood as he also donated soccer kits to a local team.

“I hope that this kit will result in a player from this village joining Chippa United. Maybe we’ll even get a coach from here,” he mused - drawing laughter from the crowd gathered inside a marquee.

The joke was not lost on them.

The event was attended by Human Settlements, Water and Sanitation minister Lindiwe Sisulu who was accompanied by her deputy, Pam Tshwete and Eastern Cape MEC for Human Settlements Nonkqubela Pieters.

The Moni family of 14, lived in a single room mud structure which measures 20m2.

But on Monday the family's fortunes turned for the better when they were handed over the keys to their new solid structure home - built using alternative technology.

The village was among those affected by the floods that left a trail of destruction, when over 200mm rainfall was recorded, in April.

The keys to the house were handed to the widowed Macacisile Moni, 61, who could not contain her joy of owning her first solid home.

“I have never been to heaven but today it feels like I’m in heaven. This is the happiest day of my life,” said Macacisile, as she wiped tears from her face.

“When it rains I would ask my children to go seek shelter at the neighbours’ homes as I feared that this house would collapse on us. I would say to them, ‘it would be better if I’m the only one who dies inside this house’,” said Macacisile, who shares her house with her brother, her eight children and four grandchildren.

Their other dwelling, a mud rondavel, was washed away by heavy rains.

Sisulu assured Moni that the title deed for the house will be registered in her name and encouraged her to look after her new home.

The mud structure - with its walls cracked and a collapsing roof - stood in stark contrast to the spanking new house.

Mpengesi announced that his Chippa Holdings will be donating 90 houses to the poor all over the country.

“We will build 10 homes per province. This is my way of giving back as I know hardship…having lived in a shack in Cape Town while working as a security guard,” said Mpengesi.

Rulani Mokwena has admitted that he was relieved after leading Orlando Pirates to his first victory at the helm in the win against Chippa United at ...
Sport
2 years ago
Next Article