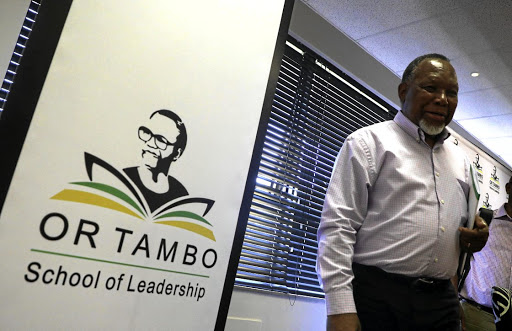 Chairperson of the OR Tambo School of Leadership Kgalema Motlanthe during a presentation of the school's year 2020 Action Plan.
Image: Thulani Mbele

The ANC's political school is racing against time to induct party leaders who could stand for election in the next elective conference.

David Masondo, who heads the OR Tambo School for Leadership, yesterday said they wanted to ensure they take all national executive committee (NEC) members through their courses by the next elective conference in 2022.

The political school was established last year as part of resolutions taken at the ANC's 54th national conference.

The conference resolved that in order to be eligible to stand for positions, party leaders would have to go through at least 70% of the school's modules.

The aim of the school is to produce ethical leaders who are also critical thinkers.

"We are hoping that in the next conference, no one should be elected into the NEC having not done these courses in line with the decision of the NEC itself. If that doesn't happen it means that we are reneging on a decision that was basically taken," he said.

Why is the ANC's cadre deployment policy such a contentious issue?
Opinion
1 year ago

The school has formulated 13 courses which include political economy, history of the ANC and its tripartite alliance, introduction to the constitution, gender and women emancipation, among others.

Masondo said they wanted to create critical thinkers in the party who do not only
resort to insults but are able to debate on issues.

"They must be exposed to those so that when you engage your opponents you're not engaging them through insults and labels and all. You must have carefully thought through the arguments, understand the pitfalls of your opponent's arguments in a much more logical sense."

The school's chairperson, former president Kgalema Motlanthe, said that they were aware of the challenges they may face as they go on a drive to educate and create ethical party members.

"The school is not a bakery, it's not going to bake readymade upright cadres. Remember that even the most advanced and conscious members will not be aware when their political consciousness part ways with them.

"Unfortunately, it does not bid you farewell. The school is meant to inculcate political attitude so that when you make choices and engage in conscious actions, you do so from an informed position."

The best way to nail public officials who have looted public funds and aided state capture with impunity was to use the tax system.
News
1 year ago