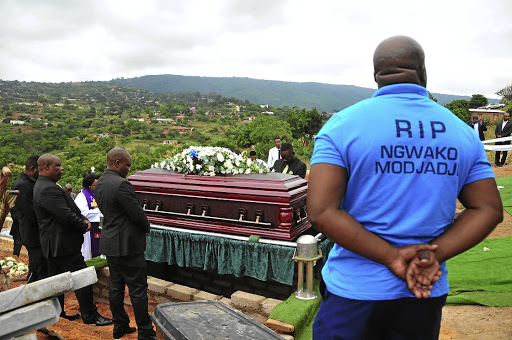 Fallen City Press journalist Ngwako Modjadji was sent off to his final resting place to the smooth notes from the Ramoroko Brass Band in Limpopo yesterday.

Modjadji, 40, who was killed in a hit-and-run accident in Soweto last week, was buried on a hill overlooking his picturesque village of Sehlakong in Ga-Modjadji.

At a service held under an overcast sky at his home, speakers paid tribute to the political reporter as a principled, ethical and honest journalist who shied away from sensationalism. The notes from the brass band reverberated through the hills as hundreds of mourners gathered to pay a sad farewell.

The village, which is the seat of the rain-making Modjadji dynasty to which the former Sowetan, Drum and Citizen reporter belonged to, was shrouded in mist and a cover of grey clouds during the early morning as mourners arrived to pay their last respects.

Zuma said in his message that he was saddened by Modjadji's passing.

Modjadji interviewed Zuma in Pietermaritzburg during an ANC door-to-door campaign in KwaZulu-Natal last week, two days before he was struck down by a car that killed him.

Mabe described Modjadji as "my friend who always appeared neat and ordinary, yet forthright".

"Those of us who had the privilege of crossing paths with this great son of the soil can attest to the fact that Ngwako's character was one of royalty and kingship - always reserved," said Mabe, who studied journalism with Modjadji at the then Technikon Northern Gauteng in the late 1990s.

"Ngwako demonstrated high levels of intimacy towards the profession and paid greater attention to detail. He was never flamboyant and maintained a very ordinary demeanor. He only spoke when so required and hardly raised his voice. Ngwako was never the soul of the vibe," he said.

Mashilo and Ramathuba described Modjadji as a dedicated but fair journalist who always sought to express both sides of the story.

City Press executive editor Dumisane Lubisi said the paper had lost a dedicated and talented scribe who was always willing to go beyond the call of duty.

Modjadji's brother, States, said he had introduced him to journalism and was proud that he had followed it as a career and shone.