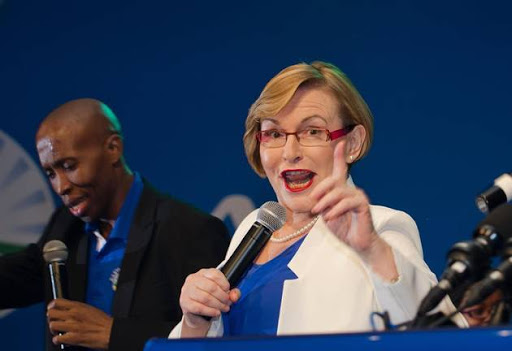 Focus has to be on coalitions that ‘are driven by values’ as DA and UDM negotiate.

The DA's talks with the UDM are already embroiled in uncertainty. The UDM has demanded that the DA apologise to former Nelson Mandela Bay mayor  Bobani as part of its conditions for coalition talks.

UDM leader Bantu Holomisa has stated that for talks to proceed, the DA should hand over a copy of a PwC report that was commissioned by erstwhile DA mayor Athol Trollip to investigate corruption-accused Bobani while he was in charge of the public health portfolio in the city. Holomisa believes the report will prove Bobani’s innocence.

Coalitions will dominate the political landscape after the next elections and the DA will have to be strong and stable to effectively manage such arrangements, Zille said.

While it is unlikely that the DA will get 51% of the vote in the next general elections in 2024, the ANC could drop below 50%. The DA is in talks with the UDM, a former coalition partner in Nelson Mandela Bay, to establish a working relationship.

However, coalitions have proven to be problematic. After the municipal elections in 2016 several political parties joined forces to elect DA mayors in hung municipalities, including Johannesburg, Tshwane and Nelson Mandela Bay.

The collapse of the DA-led coalition rule in Johannesburg and Nelson Mandela Bay illustrated the fragility of such coalitions. The DA is also set to lose control of Tshwane.

However, she said, the future of SA lies in coalitions.

The Eastern Cape government will send an acting city manager and CFO to Nelson Mandela Bay to help stabilise the city.
News
2 years ago

"We are in very complex period with consolidation and this will continue for a couple of years. The DA has to be strong and stable and [focus on]
vision-led and values-driven coalitions ... the biggest challenge with coalitions is getting
them to work," she said.

Former DA leader Tony Leon, who was the main speaker at the Cape Town Press Club lunch, said coalitions are difficult to manage. "The thing about coalition arrangements [is] you do not determine who your partners are ... if you get less than 50% of the vote you have to deal with the election results which determine who your potential partners are," he said.

Touching on the future of the DA, Leon said the party has suffered a lot in recent times but is now on the right path under its new leadership.

Leon was part of the three-member review panel that investigated the reasons for the DA’s poor election showing in the 2019 general elections.

That panel laid the blame squarely on the leadership, saying in its report: "It is our carefully considered view that the single most important factor in shaping the DA’s current circumstances is a failure of effective leadership."

The report led to the resignations of party leader Mmusi Maimane and other senior leaders, including Herman Mashaba.

"I am not sure what Mmusi [Maimane] and Herman [Mashaba] are actually going to do ... there are some warning lights from the past that are worth reflecting on ... I am sceptical not because I wish them ill, but because I think it’s an overcrowded field ... if I were them I would think again".

Leon also called for the outsourcing and privatisation of state prosecution functions amid concerns that no-one has been arrested for state capture.

"Outsource and privatise [the] prosecution functions and hand them over to people who are competent and independent minded. The independence of the NPA [National Prosecuting Authority] has to be restored and reinforced, not just spoken about," Leon said.