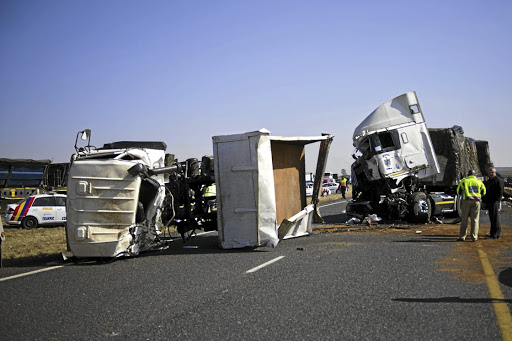 The crash scene on the N12/N4 split in Emalahleni. The N4 is more dangerous in Nelspruit, RTMC says.
Image: Gallo Images / Alet Pretorius

The N4 in Nelspruit, Mpumalanga, and R61 in Mbizana, Eastern Cape, have been declared the country's most dangerous roads.

This is according to an analysis conducted by the Road Traffic Management Corporation (RTMC) in the past five years. The announcement comes after 24 people were killed in the two provinces over the past weekend.

RTMC spokesperson Simon Zwane told Sowetan sister publication TimesLIVE they had drawn up a list of 100 roads across the country which are notorious for fatal accidents.

Zwane said the N4 in Nelspruit averaged around 20 deaths a year, while the R61 in Mbizana averaged 15.

"The analysis was done over five years. This will also help when we deploy traffic officials on our roads this coming festive season," Zwane said.

Zwane attributed the number of deaths at the weekend to drunken driving.

"We have come to know that over month-end weekends, fatalities increase. People have more money to spend on alcohol," he said.

Zwane said traffic officials will concentrate on speeding, overloading and jaywalking for the duration of the festive season.

Influencer 'ThickLeeyonce' on the mend after horrific car crash

A close friend of Lesego “ThickLeeyonce” Legobane has shed light on the car accident that put the model and influencer in ICU.
News
2 years ago

He said the R573 in Kwamhlanga, Mpumalanga, was the third most notorious road in the country. Other problem roads in the top 10 were the R61 in Cradock, N1 in Laingsburg, R71 in Mankweng, N2 in Libode, R37 in Mecklengburg, M35 in Folweni and N3 in Warden.

Seventeen people have been killed in accidents on Western Cape roads since Friday, including a horrific accident in Kleinmond on Saturday evening when a driver lost control of his vehicle and ploughed into three children who were walking next to the road.

Transport minister Fikile Mbalula has expressed concern about the many fatalities on the country's roads, and called on road-users to ensure safety was the priority.

Mbalula vowed to curb this year's festive season death toll by at least 10%. He will unveil steps to achieve this later in the week when the transport department reveals its festive season road safety campaign.

Last month, Mbalula said the rollout of the Administrative Adjudication of Road Traffic Offences was not just about a more efficient way of adjudicating road traffic offences. It would also ensure the creation of effective incentives to change road-user behaviour.

A Limpopo family which lost seven members, including two minors, in a horrific multiple car crash two months ago, is struggling to find closure as ...
News
2 years ago

"We are engaging with all traffic authorities in the country and traffic officers through relevant channels to ensure the implementation of this intervention does not negatively affect conditions of service of our officers," said Mbalula.

This has resulted in Mbalula considering a number of changes to the country's traffic laws, including a 0% blood alcohol level for drivers and reducing national speed limits.

A week ago, Mbalula's spokesperson, Ayanda Allie Paine, said the minister had received a "plethora of proposals", including reducing speed limits on the country's roads by 20km/h.

This would effectively drop the speed limit on highways from 120km/h to 100km/h, while the limits on main roads would drop from 100km/h to 80km/h.

Speed limits in residential areas would decrease from 60km/h to 40km/h.