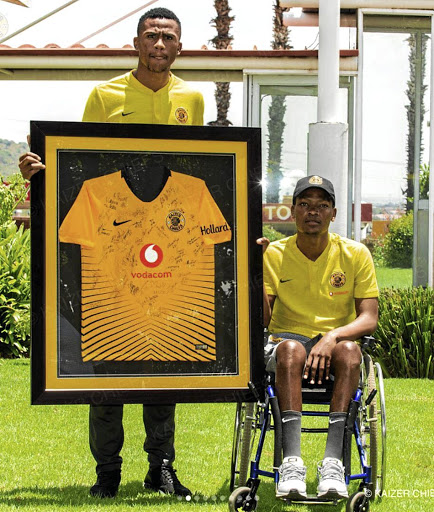 Last November, Meyiwa was involved in a car crash that has left him wheelchair-bound.

A few months after the accident, the club announced the news that his injury was irreversible and that the player had to retire from football.

It has been a year and Meyiwa, 19, has until now stayed away from the media and returned home to Pietermaritzburg to be with his family.

Former teammate Lebogang Manyama had words of encouragement for the former central midfielder.

Brilliant Khuzwayo hangs up his boots

"Obviously we miss him a lot and I hope he is recovering well. Last I checked he started to try to walk and hopefully he can get to full recovery," Manyama told Sowetan.

"We miss him and love him and he is a Khosi for life. It's was not nice because he is a good boy who we thought was destined for a good future for the club and the country.

"I hope mentally and emotionally he has healed."

Manyama was himself involved in an car crash from which he emerged unharmed.

Fellow midfielder Willard Katsande says what happened to Meyiwa is still painful especially because the youngster was expected to take over from his role in the team.

"Wiseman was a good kid and good student. He was meant to take over from me," he said.

"It's so touching because we have lost somebody who was meant to contribute to South African football. We play with him in our hearts.

"I keep in touch with him to show him he is still part of us."

Retired Kaizer Chiefs midfielder Wiseman Meyiwa revealed on Tuesday afternoon that he misses playing football and hopes to return to the game he ...
Sport
2 years ago

The details of the 23 year old's passing were not immediately available at the time of publication, but reports are that Mbamba died in a car ...
News
2 years ago