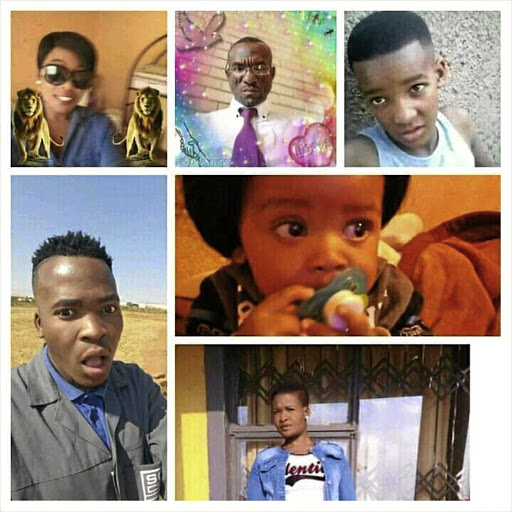 Six of seven family members who were killed in an accident outside Pretoria two months ago.

A Limpopo family which lost seven members, including two minors, in a horrific multiple car crash two months ago, is struggling to find closure as they are still waiting for DNA results before laying their loved ones to rest.

The deceased, who are all members of the Matloa family from GaSetshaba village in Moletji outside Polokwane, were killed in September when a Toyota Corolla they were travelling in was involved in an accident on the N1 between the Petroport garage and Wallmansthal near Hammanskraal outside Pretoria.

A brown tent, which was put up two months ago after the accident, stood empty behind the family's home when Sowetan visited yesterday.

The tent had gathered dust as funeral plans have been put on hold as the family has no idea when exactly the DNA results would be released.

The tent now hosts regular prayer sessions and has also become a gathering place for those visiting the family to express their condolences.

Heartbroken Maria Matloa, 73, said her elder son Adam was travelling with his two sons, his niece and her children when the incident happened.

"Life is not easy as we continue to wait for the DNA results. Since the day the tragedy happened, we have been waiting and they are telling us it will be completed soon," she said.

"I used to speak to them over the phone now and then. I miss their voices and seeing their faces, but there is nothing I can do, it is God's will," she said.

Eight people died in a head-on collision between a bakkie and car on the R531 road between Hoedspruit and Swadini, Limpopo, on Saturday.
News
2 years ago

Matloa said the police have told them that the reason the DNA results were taking long was because the bodies were burnt beyond recognition, particularly those of the children.

"The authorities came to us and told us that they have completed identifying five of the deceased, and that only the children's results were still outstanding. We are not blaming anyone for the delay because the authorities are giving us updates each and every Tuesday," she said.

Adam's brother Isaac said he's struggling to focus at work as he wants to close the chapter.

"The fact that they haven't been buried is torturing my mind. I'm worried about their souls, they need to rest in peace," he said.

Another family member, Elizabeth Matloa, said the tent was necessary as they have regular visitors who are showing the family support. "From Monday to Friday we have prayer sessions in the marquee with church members. We're also inundated with visits from community members and traditional leaders who are really supporting us."

Bodies of the deceased - Adam, 50, Eunice, 37, Davies, John, Tshepo, Reatlegile (nine months) and a nine-day-old infant - are still in a mortuary and will only be released to the family once the DNA results are released.

Police had not responded to Sowetan's questions by the time of going to print.

Criminal charges have been laid against the man who was behind the wheel of the Nissan bakkie that overturned on Tuesday, killing five children ...
News
2 years ago

Nine people were killed and 27 more sustained serious injuries in an accident in Limpopo on Saturday night.
News
2 years ago
Next Article