Counting change in a taxi drives me nuts 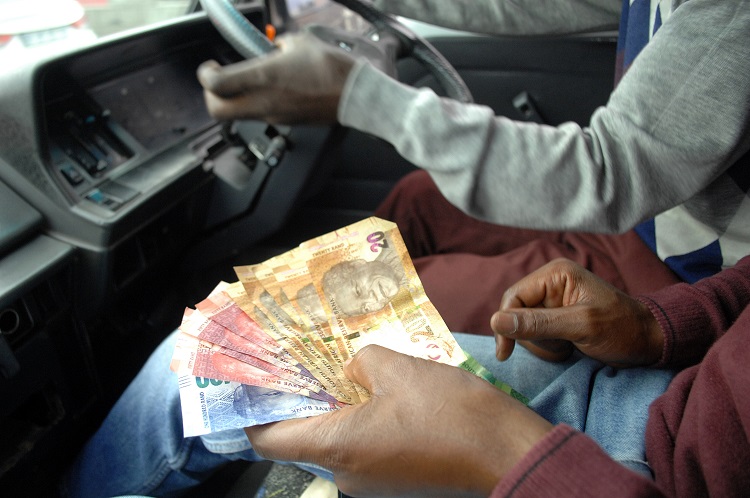 The writer says when travelling by minibus, she avoids sitting by the taxi driver because the 'honour' of counting change falls on whoever sits there.
Image: Ziphozonke Lushaba

After my car accident in January, I have been suffering from post-traumatic stress when I am called to drive. I get exhilarating anxiety attacks behind the steering wheel and every hoot nearly gives me a heart attack.

So, I have had to rely on friends and family to get me around, while I sit in the car and pretend I am being chauffeured about.

Nonetheless, I still take the Vrrr-pha! for solo trips because I can't resist the pleasure of pushing that much torque on the road!

However, on a random occasion, I do pluck up some courage and venture to town in a taxi. Those have always been great entertainment in my hood.

You see, taxis are vessels for the rainbow nation, owing to widespread poverty. And there is nothing more amusing than the moments when a passenger provokes a Quantum-wide conversation about corruption.

So I always look forward to sitting back and giving an ear to whatever debate on current issues sprouts along the journey.

Malindi to quit job as taxi driver
Sport
1 year ago

And for peace of mind, I am always tucked in either in the back seat, or anywhere away from the front. Well, I avoid counting change in a taxi at all times.

But in a taxi, some freedoms are restricted and the driver is king! And so this one afternoon, on my way to shave my hair off because "new season, new start", I was bullied into making space for a heavy lady and move to the front seat.

I did not resist. I would not dare. And that is how I was to be beaten 4-0 by taxi maths on an insanely hot spring day!

Firstly, I was alone in the front passenger seat while the rest of the taxi was almost full.

And suddenly, the seat between me and the driver felt like a hundred metres wide. Also, I had just come out of hospital two days prior.

I was still a tad weak and the scorching sun was now right in my face. And then the stereo was on, so I had to ask for repeats of how many people were paying.

To wipe sweat off my face, I put the money on the seat next to me. Truth be told, I was sweating because I could not remember which money was for the "two-one-one" lot and how much the "one and two" people handed me.

'There still are some angels out there': taxi driver foils hijackers

And because we all have accepted that taxi drivers don't owe us change, everybody had paid in mostly coins.

But I had a smartphone, see, and I was not going to waste one more minute adding and subtracting, and multiplying uneven rands.

Only, using a calculator to count change in a taxi is basically the eighth cardinal sin. It is treated with the same contempt as speaking English to the rank marshal. And I could see the judgment on the driver as he quipped: "Eyami yi (mine is) R192.50!"

I had to turn back and count the number of heads in the taxi because I could not figure out how he came up with that figure.

Then my battery died while I was punching the third installment of fare that came through. I took maths on standard grade, and even then, we were allowed to bring in scientific calculators.

And so I decided that I will not spend another minute trying to figure out the sum of 11; I faked an in-coming phone call and exclaimed: "Accident? Where? Oh my God..." and asked to alight immediately.

The mister would have to find a hundred and nighty two rands fifty cents in the stash I left on the seat himself. I crossed the road and flagged a taxi back home. Got into my car and drove my damn self to the mall!

Cheapest - and most expensive - places to catch a taxi revealed

Egypt and India are the most affordable places amongst the world’s top cities to catch a taxi‚ while South Africa is ranked 16th. This is according ...
Good Life
3 years ago

There is no greater offence than messing up a person’s change in a taxi, not closing the door behind you when exiting is a close second. But once ...
News
5 years ago
Next Article