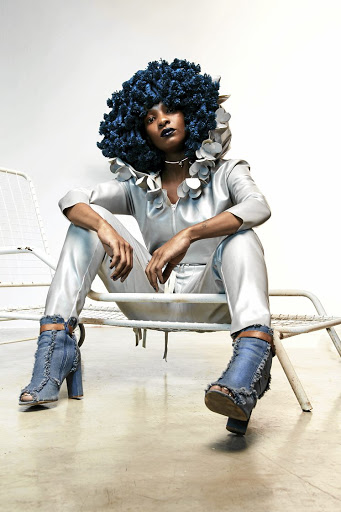 Moonchild Sanelly will perform at Rage in the City tomorrow in Johannesburg.

Moonchild Sanelly thinks she cheated death after she was hospitalised with debilitating symptoms of malaria.

She contracted the life-threatening disease in Malawi where she had gone to perform at Lake of Stars international festival last month.

Despite her near-death experience during her four-day hospitalisation, Moonchild still sees the funny side out of the whole ordeal.

"I did see Jesus and his eyes are squint," she joked, albeit with a nervous giggle.

Before she was hospitalised, the 32-year-old born Sanelisiwe Twisha had travelled to Los Angeles and Austria unaware she had contracted malaria.

"It was scary. I remember telling myself there is no way this is going to come out and [have people] say, 'rest in peace Moonchild'," she recalled.

"I was in and out of consciousness. I was so weak and we initially thought it was just jet lag. So, I was travelling and didn't know that I had malaria in my system.

"Apparently when they called the ambulance I was so delirious that I pushed my friend. It was crazy... I got so lucky. Every doctor kept saying your timing was so vital."

Moonchild: 'I’ll post my bum until you stop being shocked'

A week after she was discharged, she was forced to return to hospital after she fell extremely ill once again and had to receive blood transfusion.

Moonchild Sanelly has been on medical rest for the last month and had to cancel the gigs she had been booked for.

She's back on her feet again and her usual bounce was all there this week when Sowetan met her. As a result, this weekend she returns on stage for Rage in the City, which also features Riky Rick, Sho Madjozi, Nasty C , Kabza de Small, Shane Eagle and Boity on the line-up.

She will perform on day two (tomorrow) of the three-day long music festival in Constitution Hill, Johannesburg.

"I generally don't like to take breaks, because it's a privilege to be on stage; you work towards not having time, to live this thing and just flourish. I don't take it for granted to be on stage and be paid for it."

This year has been a big year of Moonchild Sanelly, especially after featuring on Beyonce's song My Power, alongside Busiswa, and Yemi Alade.

Busiswa is buzzing after getting a shout-out from Halle Berry

Busiswa was on cloud nine when sis Halle Berry gave her a young shout-out recently.
Pic of The Day
2 years ago

She also noted rocking the stage with international DJ Diplo at Coachella Valley Music and Arts Festival in Indio, California, in April as another highlight. She said the turning point in her career was when she wrote a 10-year plan in 2016 that listed her dream collaborations and strategy.

Some of the names included Beyonce, Diplo and DJ Maphorisa - all of whom she has since worked with.

"It happened sooner than I expected. I mean my top three: Coachella, Diplo and Beyonce all happened. I've just written the next list that I can't share.

"Working with people that I grew up listening to, not just on a local scale, but international scale has been crazy, but I love it. I've seen and experienced the changes, but it's surreal.

"But I'm nowhere near where I want to be yet. I want to be a global artist, not just through collaboration, but on my own. I sit in the toilet like 'is this sh*t really happening'."

The youngest of four children, Moonchild knew the limelight from a young age as she was a child model before studying ballroom and Latin dance forms.

Maphorisa on gqom: 'You can’t say it is trash when we have a gqom song with Beyoncé

Durban-born music pioneer DJ Lag has become the first gqom artist to submit his work for consideration for next year's Grammy Awards.
Entertainment
2 years ago
Next Article