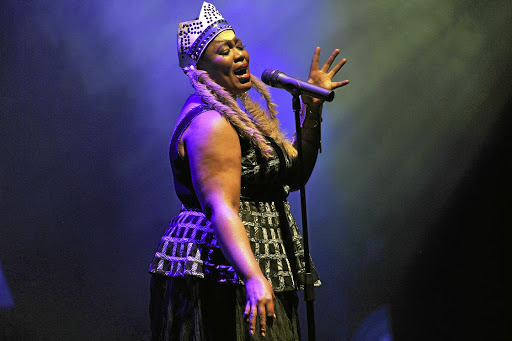 The force and talent that is Tsonga rapper Sho Madjozi is not only taking SA by storm, but she is shaking tables globally too, making it impossible to ignore her or her music.

Veteran musician Thandiswa Mazwai is one of scores of locals who have congratulated Sho on her musical success after her new hit, John Cena was played on The Ellen Show on Monday. Thandiswa is ready to bid Sho farewell, like she did actor and musician, Nakhane Toure.

“Go tour the world. Go be a world star”, her tweet read in part.

Babe!!!!!!??? Can we wave goodbye to you like we waved to @nakhaneofficial like goodbye babe! Go tour the world! Go be a world star! Like famba babe?? Don’t forget us. https://t.co/Kw2bQ5muJX

In a separate tweet, she acknowledged Moonchild Sanelly and Busiswa, who also recently flew the SA flag high through their collaboration with Beyoncé on the soundtrack My Power, for the movie The Lion King.

Sho Madjozi. Moonchild Sanely. Busiswa. These girls are serving and I’m all about it!

Sho debuted John Cena in August on the international music platform, Colors, a performance which has garnered more than three million views on YouTube.

WATCH| John Cena gets down to Sho Madjozi's track

Sho Madjozi's John Cena track is such a major vibe that even the man himself is dancing to it.
Entertainment
2 years ago

Here's where Sho's John Cena will be played around the world.
Entertainment
2 years ago

Jessica Nkosi, Omuhle Gela & Thando Thabethe: see what your fave celebs got up to this weekend