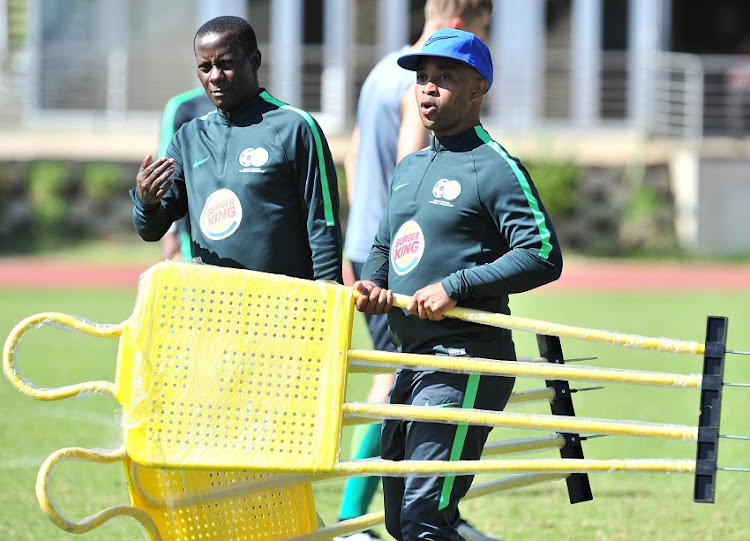 Coach Helman Mkhalele will lead the South Africa side at the 2019 COSAFA Under-20 Championships in Lusaka from December 4-14‚ where the team will seek a hat-trick of titles.

Former Bafana Bafana star Mkhalele replaces Thabo Senong‚ who led the side to the last two FIFA Under-20 World Cup tournaments‚ but is now in charge of the Lesotho national team.

Mkhalele is set to be assisted by another great former winger in Arthur Zwane‚ with renowned youth coach Shawn Bishop to act as analyst.

Many of Senong’s squad have moved up to the national Under-23s‚ while the dates of the tournament have also restricted Mkhalele’s selection as any promising teenagers he might have hoped to pick from first team squads in South Africa’s top two divisions are not available.

Instead Mkhalele has gone for a younger group with one eye on the 2021 World Cup‚ and that gives South Africans a fascinating glimpse into the next generation of potential national team players.

SA Under-20 skipper Khulekani Kubheka is of the sentiment that Helman Mkhalele deserves to be given the Amajita coaching job on a full-time basis.
Sport
2 years ago

Kaizer Chiefs have supplied four players to the squad‚ including striker from the MultiChoice Diski Challenge side Rahim Milazi‚ midfielders Tshepo Myeni and Keletso Sifama‚ and 16-year-old goalkeeper Bontle Molefe‚ who was promoted to the first team squad earlier this year.

BidVest Wits also have four players‚ including defender Athenkosi Mcaba‚ who was previously part of Molefi Ntseki’s national Under-17 side that competed at the 2018 COSAFA championship in that age-group.

Goalkeeper Prince Cuwen‚ midfielders Lancaster Human and Keagan Mitchell‚ and striker Sinenjongo Mkiva are the others.

Midfielder Mohamed Shahabodien of Farouk Khan’s Stars of Africa Academy is another exciting player to watch‚ while the selection of defender Khotatso Balipile from the soccer programme at renowned rugby school Grey College is an interesting development.

South Africa have been drawn in Group B at the competition in Zambia and open their campaign against Mauritius on December 5.

They will then face Madagascar three days later‚ before closing out their pool play against Lesotho on December 10.

The top team in each of the three pools advances to the semifinals along with the best-placed runner-up.

South Africa have lifted the title in the last two years when the likes of Lyle Foster‚ James Monyane‚ Luke le Roux and Nkosingiphile Ngcobo were all stars of the side.

Notoane tells his under-23 players to dream bigger

South Africa Under-23 coach David Notoane has told his players to look beyond the 2020 Olympics and cast their gaze wider to the 2022 and 2026 World ...
Sport
2 years ago

Former Amajita coach Thabo Senong will not be looking for any excuses when he leads Lesotho into their Fifa World Cup qualifier against Ethiopia on ...
Sport
2 years ago