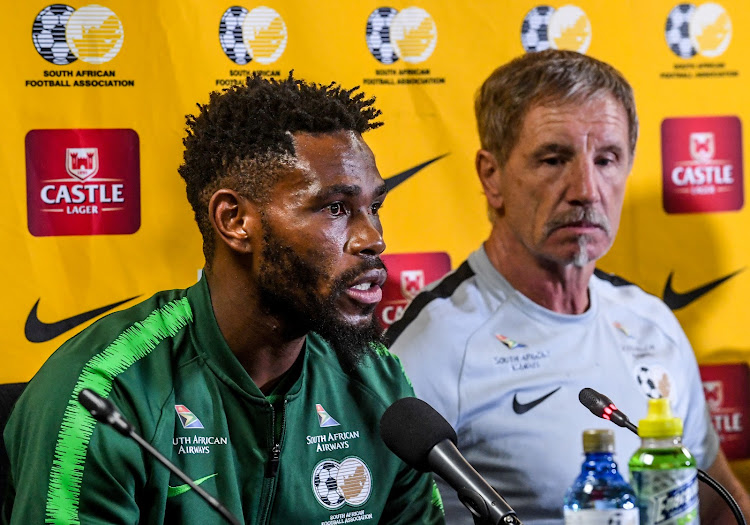 All eyes will be on Bafana Bafana later this month and captain Thulani Hlatshwayo admitted that they will be under pressure to deliver at the Africa Cup of Nations in Egypt after almost all the nation’s national team suffered defeats in the last few days.

Coach Stuart Baxter’s charges face Ivory Coast in their first match in Cairo‚ Egypt‚ on June 24 and Hlatshwayo said the perfomances of the other national teams have put the spotlight on the senior national team.

‘‘The first camp started well and we have seen all the results and even those of the Cosafa Cup team‚ having been knocked out of the Cosafa” he said.

‘‘And the (Blitzboks)‚ the cricket team and Banyana Banyana. So we are sure that we will be prepared for later this month.”

The Bafana captain admitted that the stakes are high and they will have to perform after a run of disappointing results.

‘‘For sure it does (raise the stakes for the senior national team)‚” he said.

‘‘There is always pressure all the time and we find ourselves where we are.

‘‘We havbe put ourseleves here and we have to make sure that we take ourseleves out.”

The Proteas got the disappontment rolling when they lost by 104 runs to England in their opening match of the Cricket World Cup on Thursday.

And not to be outdone‚ coach Thabo Senong’s charges crashed out of the FIFA Under-20 World Cup a day later without winning a single match in the tournament after a 1-1 draw with Portugal on Friday night.

Things continued to go downhill when a largely under-23 South African side coached by David Notoane crashed out of the Cosafa Cup after a 5-4 defeat on penalties to Botswana in Durban on Synday afternoon.

The Blitzboks’ season ended with a bronze medal at the Paris leg of the 2018/19 World Sevens as Fiji claimed the title.

The South Africans had been humbled 33-7 by New Zealand in the semifnals before bouncing back to beat the US 24-7 in the bronze medal match.

The Proteas continued where they left off on Thursday after their 21-run loss to Bangladesh in the World Cup on Sunday.

Banyana Banyana rounded upo the dismal weekend for SA sports lovers when they were handed a 2-7 thumping by Norway in an international friendly match at Stade Moulonguet in Amiens‚ France‚ on Sunday.

Asked how difficult it is to bounce back from a defeat‚ Hlatshwayo said: ‘‘Jah you have to. It's not how hard you fall‚ it's how you get back up again.

"They say you are as good as your last game‚ so you just go back and fix the mistakes and make sure you do the right things.”