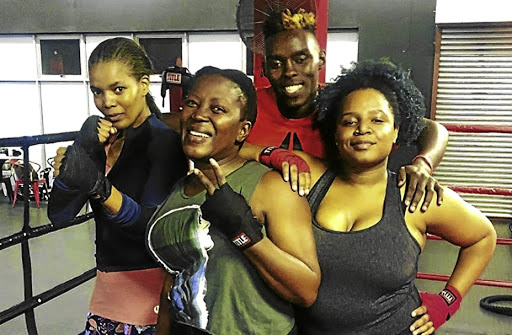 Ndongeni, who relocated to Johannesburg from the Eastern Cape in 2015, is the regional manager of all Fight Club Fitness gyms and is also personal trainer to some celebrities, including seasoned television actress and successful business woman Connie Ferguson and actress
Rami Chuene.

Training clients helps them financially while waiting for fights. For those who are from other provinces, the money they earn through personal training also helps them pay rent.

Ndongeni is fortunate that he already owns a house in Fourways.

"The business has taken a big knock because people are now scared to come to the gym," he said. "Obviously, some still come but in a very small scale and if it continues being the way it is, people may lose jobs."

Ndongeni is fortunate that his special clients still come to the gym.

Chuene approached Ndongeni to train her and she introduced him to Ferguson.

The boxer says they make sure that they sanitise everything and anything that is in the gym before, during and after training.

"Clients coming in also get sanitised," he said. "We do what we have been advised to do to minimise the spread of this virus. But I must tell you that I am one of the people who has suffered directly."

His fight was to feature in Bob Arum's tournament that was to be headlined by the bantamweight unification between IBF and WBA Super champion Naoya Inoue of Japan and WBO holder John Riel Casimero from the Philippines.

It was to take place at Mandalay Bay Casino in Las Vegas on April 15. But the whole event has since been postponed to a date that will still be confirmed.

"It was a big fight for me, personally, to fight in such an event and I had already spent a lot on my diet," said Ndongeni, who is trained by Sean Smith.

"I'm optimistic that the virus will be defeated, lives be saved and get back to our normal lives. I am now banking on my clients and my sponsor for a living.

"My heart goes out to those boxers whose only way to earn money is get inside the ring and box because action has been suspended, until when, really we don't know."

Ndongeni adds: "Even to us who have sponsors it is a question of praying that a solution is found because sponsors also face their own challenges and they also want to get value for their money from us. They can easily cut us out."