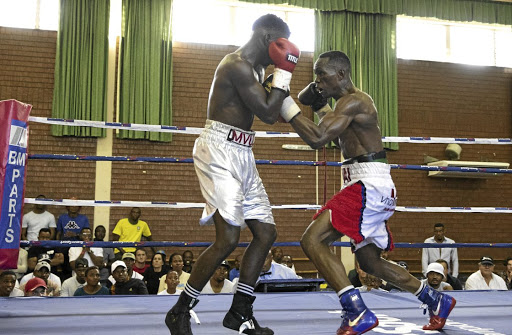 Tshifhiwa Munyai, right, on the offensive against Siphosethu Mvula at the tournament on Sunday. / Nick Lourens

It was double celebration for trainer Alan Toweel Junior and Tshifhiwa "Atomic Spider" Munyai after the boxer was crowned the new SA lightweight champion on Sunday after defeating Siphosethu Mvula for the vacant domestic title on points.

That was because Toweel had tried, but unsuccessfully with four boxers - Rofhiwa Maemu, Justice Siliga, Sikho Nqothole and Frank Rodriguez - to produce national champions.

Munyai's fight on Sunday was his first attempt at the SA title.

It will be a case of do or die for former world boxing champion Tshifhiwa Munyai when the 34-year-old opposes hot prospect Siphosethu Mvula for the ...
Sport
2 years ago

Top-rated junior heavyweight contender Akani "Prime" Phuzi unashamedly said he is not interested in challenging for the South African title for as ...
Sport
2 years ago

He is currently the only national champion from Limpopo which has previously produced great champions, including Joseph Makaringe who reigned supreme as the welterweight champion until he vacated the national title.

Munyai has held the Commonwealth, WBA Intercontinental and Pan African and IBO titles. The veteran of 32 wins, six losses and a draw is from Makwarela outside Thohoyandou.

In the main supporting bout of Charing Cross Promotion, Phuzi retained his unblemished slate to 11 wins with five knockout after doing the number on Malawian Alick Gogodo in the third round while Rodriguez defeated Stanis Apanu on points over six rounds. Ryno Liebenberg outpointed Alex Kabangu over six rounds.