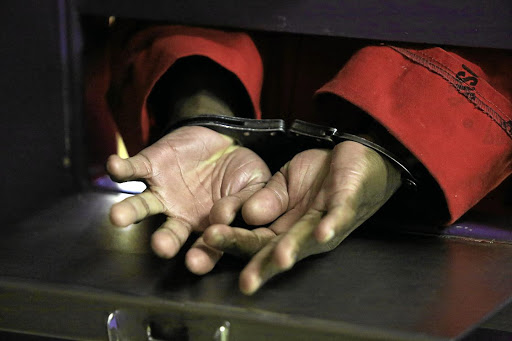 Bello Mohammed claims that two lawyers he paid to help him lodge an appeal against his sentence failed to do so despite the fact that he paid them. He now wants his money back. Mohammed further says he was sent to prison for a crime he did not commit.
Image: THULI DLAMINI

Bello Mohammed is angry, frustrated and disillusioned after he was convicted for 12 years for a crime he claims he never committed.

Mohammed said what pained him is that the attorney he had employed to lodge an appeal on his behalf has done nothing but only demanded money from him since January.

He said when he called his attorney, JP van Eden from Limpopo, on June 16 for an update on his case he was shocked when Van Eden asked him to provide his case number and the date in which he was sentenced, information he has already supplied in January.

However, Van Eden denies knowing Mohammed or ever receiving money from him.

"I don't know such a person, I have never taken any instructions from Mohammed or spoken to him, not even this [last] Tuesday as he claims," Van Eden said.

When asked about the payment that Consumer Line has seen apparently deposited by Mohammed into "Van Eden" FNB account, he said maybe some of his junior attorneys are attending to the case.

Subsequent questions were sent to his gmail account and texted messages but he had not responded by the time of going to print.

Scary time for investor in a scheme

Moretsi had to seek the intervention of Consumer Line.
Opinion
1 year ago

Mohammed said he now wants back the R8,300 he paid Van Eden because the attorney did nothing to help him.

Mohammed said he also wants R6,400 he paid to the first attorney, Lot Ramusi, in 2017, who also failed to help him after his arrest.

"I'm spending time in jail for a crime I didn't commit. It is really painful," said Mohammed, speaking to Consumer Line from the Polokwane Correctional Service facility on Wednesday.

He said his agony was compounded by the fact that his family cannot visit him as they are in Nigeria.

He was arrested in 2017 and never granted bail because he was considered a flight risk until he was sentenced in December 2019, he said.

Mohammed said he was not afraid to go to prison "but the idea that of being locked up for something I did not do really pisses me off".

The crime involves a fraudulent transfer of R385,000 from someone else's account to that of his girlfriend, Mohammed said.

He said though he gave the state attorney copies of everything, including his laptop, to prove that he was not making anything up, that was never used in his defence.

Mohammed is currently assisted by his brother, Toba Gold, who sent a letter of complaint on his behalf.

Mohammed said when he could not afford to pay another attorney he was later provided with a state attorney to represent him.

He said the woman who facilitated the fraudulent transfer was considered a low flight-risk and has since been released when thousands of prisoners were freed to stop the spread of Covid-19 in prisons due to overcrowding.

'Bogus advocate' is behind bars

At the time Rumo had allegedly defrauded Nontombi Mngomezulu, 67, whose relative was arrested for drunken driving and held at Kempton Park police ...
Opinion
1 year ago

He has now lodged a complaint with the National Bar Council of South Africa and is awaiting their response after they requested him to provide his identity document in order to investigate his case, he said.

Gold confirmed that they enlisted the services of Van Eden after his brother was arrested.

He said Van Eden initially demanded R29,000 for transcription he would use in preparation for the appeal.

"When he realised that we couldn't get that money, he reduced the asking money to R8,370 which we paid plus an additional R5,000 for his charges, but he did nothing to assist my brother. He didn't even visit my brother in prison," Gold said.

"The truth is, we do not want him on this case anymore either and he should refund us."

Ramusi denied that he did not assist Mohammed.

He said Mohammed only enlisted his services before he was involved in a major accident.

"I then commissioned my colleague, Mr Mathibe, who them visited Mohammed in prison," Ramusi said.

In a conference call Mr Mathibe said he visited Mohammed in prison more than four times to take instructions.

Many consumers who want to cancel contracts are facing challenges as the national lockdown drags on.
Opinion
1 year ago

However, Mohammed said this was not the case.

Both attorneys denied that Mohammed paid them R6,400.

Ramusi said he only recalls a payment of R5,000 of the R25,000 legal fees they asked from Mohammed, which he will refund today.

He said Mohammed only contacted him this year to inform him that he had been sentenced.

"I did not know that he was aggrieved as this is the first time I learned that he was unhappy.

"I don't want this drama in my life, just ask them to come to my office and will refund their money," Ramusi said.