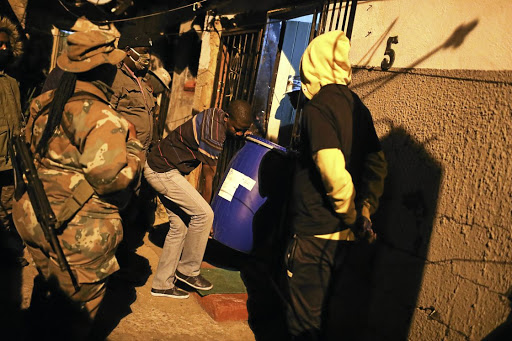 Residents carry a drum full of homemade beer confiscated by the police in Alexandra during a patrol with troops and community leaders. / Alaister Russell

With the latest relaxation of Covid-19 lockdown rules, we have so much to be thankful for. Those of our friends and family who work in the hospitality industry, and have been going without an income since their places of employment shut down, can now go back to work.

This comes weeks after the nation also got allowed to start drinking again - within reason.

At the height of the lockdown, many South Africans were behaving like nyaope kids. In many suburbs, people were paying a heart-stopping R600 for a bottle of gin that usually costs around R130. Others were paying R300 for packs of cigarettes.

When my wife eavesdropped on me having a conversation - on Zoom - with a friend who'd paid R300 for a packet of cigarettes, she said the friend was behaving like a nyaope kid: "Couldn't you wait until it was all over?," she asked.

The lockdown did indeed show us how addicted we are as a nation - to alcohol and cigarettes. My friend who paid so much money for those bottles of gin is not an exception. There is another friend who bought four packets of cigarettes at R300 each. And those were not even regular cigarettes, but some fong kongs from Zimbabwe. He bought them from an intermediary who'd bought them at R150 each at Jeppe Hostel. These cigarettes ordinarily sell for R30 a packet at the same hostel.

The intermediary was happy to tell him: "You're going to pay R300 a packet, or else you can go to Jeppe yourself." He paid.

I was laughing myself silly. Mainly because he expected me to sympathise with him. I couldn't. First, I don't smoke. Second, I have deliberately refused to consume alcohol since the imposition of the lockdown even though I have some bottles of good wine in my house.

Liquor sale restrictions also showed me that many of my friends have not forgotten how to brew our traditional concoctions - everything ranging from umqombothi, the regular sorghum brew, to imfulamfula.

Imfulamfula is made from a mixture of bread crumbs, yeast, and crushed pineapple.

As a Zulu man, I got taught at a young age how to brew umqombothi. But I've never tried brewing imfulamfula.

Ramaphosa explains why "lockdown could not go on forever"

Lockdown could not go on forever as the country does not have enough resources to continue supporting its citizens.
News
1 year ago

Yes, I have tasted it before. The kick I got from it told me even back then in the 1980s when I last tasted it: "This is deadly crap. Don't even learn how to brew it."

So, during the lockdown I've seen people bragging on social media how they were brewing imfulamfula, or ipaynapu, as they call it in Johannesburg. To speed up the fermentation process, they were adding things I'd never heard of before. And I thought, we're in trouble.

With this week's further relaxation, we can now go to restaurants and casinos - but these establishments are still not allowed to sell booze.

As I always say, to every dark cloud, there's a silver lining. Lockdown has forced some of us to rediscover self-discipline: when you can't access your vice, you grit your teeth, take a deep breath and say: "this too shall pass."

Hang in there, comrades. There's light at the end of the Covid-19 tunnel