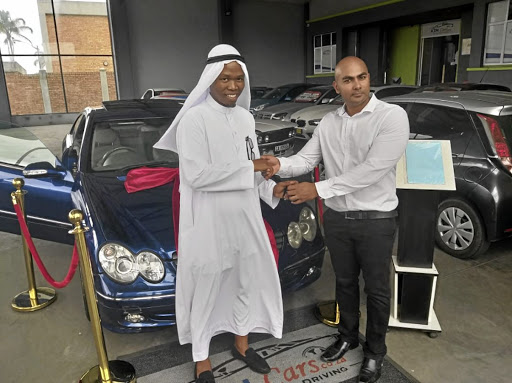 A Sowetan reader, who had bought a defective car with a fake disc from a KwaZulu-Natal car dealer two months ago, had his vehicle fixed, thanks to the intervention of the Office of the Consumer Affairs in the province.

Sipho Gqweta had highlighted his plight with Consumer Line after KZNcars.co.za sold him a defective Mercedes-Benz, but the dealership refused to refund him the money despite taking the car back.

But today, Gqweta is all smiles after the vehicle was fixed, thanks to the intervention of KwaZulu-Natal Consumer Protector Tshepiso Selepe, whose team visited the car dealer last week.

Dealership owner Vinton Perumal confirmed to Consumer Line that they fixed the car at the request of Gqweta.

But Perumal, who had threatened to sue this reporter and Sowetan when he was approached for comment for the first article, said Gqweta had initially agreed to buy and sort out the car. But Perumal said the issues Gqweta had has been sorted out by the dealershi. "We made repairs to the car to his satisfaction," Perumal said.

Gqweta said on March 7 he spotted second-hand Mercedes-Benz which was advertised for sale on KZNcars.co.za website for R90,000.

He said he later visited the car dealer to view the car, but was unable to test drive it and the salesperson Rufus Thomas allegedly told him that its battery was flat because it had not been driven for a long time.

"I was also told that the car was never involved in an accident and had no defects. I was urged to sign the offer to purchase which I did," Gqweta said.

A day later, Gqweta deposited R85,000 which was part of his provident fund after he resigned from his previous employment in January, he said.

On March 9, he went to collect his car, but there were no keys to open it or test drive it and the dealer had to use locksmith's service to open and replace the keys, Gqweta said.

He said it was only then that he noticed that the car had more problems that he had anticipated.

"Before calling the locksmith, they opened the car from the bonnet, took pictures and later filled petrol before delivering it to me," he said.

Gqweta said if he was given a chance to test drive the car before paying his hard-earned money, he would not have proceeded to buy it.

He said after driving the vehicle for about 54km from the dealership, he noticed that the brakes were faulty as it couldn't do sudden stop.

"The handbrake was not working at all, headlights were defective and wheel discs and shocks were worn out. There was also a terrible noise coming from the bonnet," Gqweta said.

He returned the car to the dealership after Perumal agreed to fix the defects, Gqweta said.

However, their mechanic could not fix it and he later demanded the refund of his money which he could not receive from Perumal despite offering to do so within 30 days, he said.

Buying a second-hand vehicle is the trickiest sale you could ever do, especially if the seller is far from you and you cannot view or test drive the ...
Opinion
1 year ago

Consumer Line saw the email in which Perumal offered to refund Gqweta his money within 30 days. We also reported in the first article that, they later offered Gqweta a Mercedes-Benz C55 AMG at a prices of R149,999 which he rejected because he had lost trust in their cars, he said.

But, it's now water under the bridge after the car was fixed and Gqweta had nothing but praises for Consumer Line for highlighting his pride.

"The whole thing caused me sleepless nights. But I'm glad the matter is over and I can relax now. Thank you Sowetan for what you did for me," he said. Gqweta also thanked the Office of the Consumer Affairs for acting swiftly to ensure that his car was fixed.