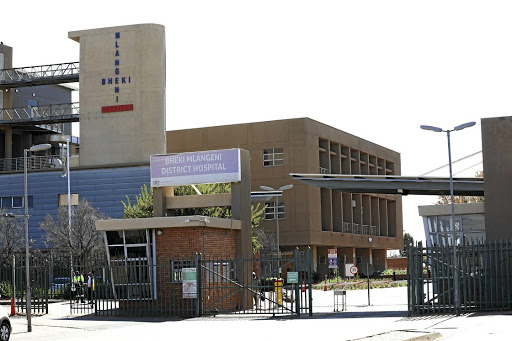 Edwin Zazayokwe died after he was stabbed multiple times in the chest at Bheki Mlangeni District Hospital.
Image: Veli Nhlapo

The family of an elderly man who was stabbed to death, allegedly by a psychiatric patient, in a Soweto hospital wants answers.

Edwin Zazayokwe, 86, died after he was attacked and stabbed multiple times in the chest with a sharp object, allegedly by a 17-year-old mentally ill patient at Bheki Mlangeni District Hospital on Friday.

The teen also allegedly attacked a 75-year-old patient with the object, injuring him.

The attack happened just a day after the teenager had allegedly slapped the elderly men in the medical ward and nothing was done about it, a nurse at the hospital revealed.

"He was admitted in the medical ward to clear any other medical conditions," Kekana said.

Zazayokwe was admitted on April 7 after his blood pressure shot up, causing additional health complications.

Teen arrested for attack on elderly men in psychiatric ward

An elderly man was stabbed to death, while another was left injured at Bheki Mlangeni District Hospital in Soweto after they were both attacked in ...
News
1 year ago

Zazayokwe's daughter Vuyelwa yesterday told Sowetan that she and her family were left horrified and shocked after being informed about the attack.

"On Wednesday, the doctor told us that they had done everything they could for him and there was nothing else they could do [his health was deteriorating]. So, when we got a call from the hospital two days later, we knew that he could be dead," Vuyelwa said.

"What we didn't know was that he was killed. We are hurt because the hospital was aware that patient [teen] was violent.

"The investigating officer told us that he attacked my father and another patient a day before he stabbed him."

Vuyelwa questioned why a psychiatric patient was placed in a ward with her father and how he was able to get hold of a sharp object.

"Where were the nurses and security guards? Why did they not fasten him when they knew that he was not a normal patient? Why was there no monitoring? We have so many questions about what happened and the hospital and the department need to explain what happened," she said.

The family is also blaming the provincial department of health for failing to keep patients safe.

Kekana said it was unclear how the patient was able to get hold of a sharp object inside the hospital.

The police may have reported a significant decrease in domestic violence-related crimes during the national lockdown, but activists and NGOs ...
News
1 year ago

"The suspect was discharged [on Friday] and was waiting to be fetched by a family member, he was subsequently arrested after the attack. Both families and staff were referred for counselling. The injured patient is receiving treatment," Kekana said.

Police spokesperson Cpt Mavela Masondo said although the suspect was expected to appear in court today, he would need to undergo a psychiatric evaluation as he did not seem to be of sound mind.

A nurse who was on duty when the incident occurred said they were alarmed when they heard screams emanating from the medical ward.

"We don't know what led to the attack, but that boy was violent. He attacked the two old men on Thursday when he slapped them around," he said.

"The hospital started admitting psychiatric patients during the period of the Life Esidimeni debacle. It was not built for psych patients and can't accommodate them.

"We do not have the proper medication for them, the staff is not trained for them and sometimes things get out of hand because they [psych patients] can get violent. We do not know how to handle the situation," he said.

DA MPL Jack Bloom said there was no excuse why the psychiatric patient was admitted into a general ward and that the hospital's management needed to be held accountable.

"The problems with Bheki Mlangeni have been there before. The hospital does not have a special ward for psychiatric patients which would guarantee their safety and the safety of other patients and the staff," he said.

The hospital has been in the spotlight following the deaths of patients who were not being monitored.