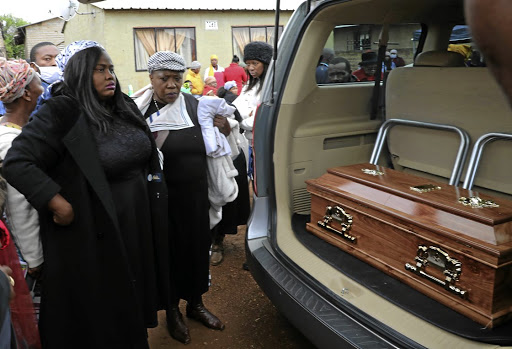 The woman accused of killing a five-year-old boy whose body was found in a local tavern has been described as a quiet and reserved person.

This was a sentiment shared by community members at Mzwandile Zitho's funeral yesterday in Orange Farm, south of Johannesburg.

Mzwandile was allegedly murdered by Pontso Mohlanka who appeared in the Vereeniging magistrate's court yesterday where she is facing a charge of murder.

Her matter was postponed until May 15 when her bail application is expected to be heard. The matter was also postponed to allow the state to verify Mohlanka's nationality with the department of home affairs.

She was initially arrested with her partner and tavern owner, who was not formally charged due to insufficient evidence.

"We are still dumbstruck by what happened. It's hard to make sense of the whole thing because she is the last person who we thought would be charged for Wandi's murder," said Petunia Nkwanyane, a resident in the area.

A woman has been charged with the murder of a five-year-old boy who was found killed in a tavern in Orange Farm last week. Pontso Mohlanka ...
News
1 year ago

She spoke to Sowetan at Mzwandile's Orange Farm home, moments after his burial. The deceased's home is just across the street from the tavern where the body was discovered on April 15.

The tavern house, now a crime scene, is sealed off with police tape.

Mzwandile's body was found in an upright position in a fridge, with his hands and feet tied.

According to residents, he also had a red rope around his neck which had small packets containing a powdery substance.

"The only time we saw anyone there was when the tavern owner's sister came to fetch something while the couple was in jail. We know that the owner was released from jail but we don't know where he is," Nkwanyane said.

Another neighbour, Phindi Majola, said Mzwandile's mysterious death had enraged the community which wanted to burn down the tavern.

She said she was familiar with Mohlanka, with whom she interacted while peeling vegetables at homes preparing for funerals in the area.

"She is so quiet and shy. I am familiar with her; we talk a lot when we peel vegetables for funerals here," she said.

Mzwandile was buried at De Deur Memorial Park near Vereeniging. His distraught father, Simphiwe Mosala, said: "I just want to know why he was killed. He was an innocent boy who had so much potential. We want justice; we are also grateful to everyone who has shown us support."