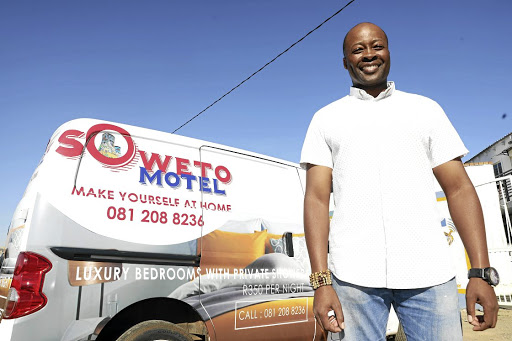 Several township-based guesthouse and Bed & Breakfast owners fear missing out on the Covid-19 relief funding for small businesses due to stringent requirements.

Many of the businesses in Soweto told Sowetan yesterday that they could be forced to close their doors after discovering that they do not fall within the requirements set by government to access funding.

Small businesses in the tourism sector will be funded through the emergency Covid-19 Tourism Relief Fund.

Last month, President Cyril Ramaphosa announced that R200m would be distributed to small businesses that have been severely affected by a halt in economic activities due to the spread of the coronavirus.

Lerato Monageng, owner of Soweto Motel in Orlando East, cut a lonely figure yesterday as he pondered the future of his business. Monageng, whose Motel is usually fully booked on weekends, has not earned income since March.

"This is frustrating on so many levels because my business is as good as dead. I can't access funding because I did not register my employees with the UIF. That's one of the things required before I can even apply," he said.

Monageng employs four people who are responsible for the motel's upkeep.

"I [now] can't pay them the same amount of money I used to pay them. This has an impact on their families because they can't buy food. I am struggling as well. I have two school-going daughters who are dependent on me. It's a nightmare and we don't know when this will end."

Monageng said there was a discrepancy in the information provided to entrepreneurs before launching their businesses. "There are certain aspects of the criteria that we do not meet. I don't know if this is because government failed to tell us about them beforehand or because we took things for granted."

Matthews Baloyi has transitioned from running an events company to manufacturing and selling face masks in just two months.
News
1 year ago

Velemina Kutumela from the Soweto Guest Houses Association committee said most of the guesthouses and bed and breakfast establishments will not be receiving any funds from the Relief Fund initiative because they too did not comply.

"Most of them applied (for funding) but they do not qualify. They do not have proper papers required for them to meet the criteria. Some of them do not have grading certificates, they are not compliant," Kutumela said.

She said most of their members were facing the stark reality of closing shop.

"It's difficult because there is no money coming in, they cannot pay their employees and we don't know when this will end," she said.

However, some businesses have applied for funding but have been left frustrated by the lack of communication regarding their applications.

Dineo Setsetse, general manager at the Soweto Hotel in Kliptown, said they applied for funding in March but were yet to receive feedback. "This has affected us badly. We decided to send our applications within a week after President Ramaphosa announced that there would be funding. But nothing has come as yet."

Blessing Manale, department of tourism's spokesperson, said they have received over 11,000 applications and that 5,400 have been completed or in various processes of completion.

"As a result of the delays due to legal challenges by those opposed to this noble cause, the department will only be able to make first payments to qualifying SMMEs next week," said Manale.

Kasi mask business booms as articles are snapped up

"I spend about R110 on a one metre of fabric and I use dutchess and polycotton. I produce about 30 masks from one metre and I sell one mask for R40 ...
News
1 year ago

Government are not medical experts or qualified economists

Up until now I have been supportive of the SA government's Covid-19 response.
Opinion
1 year ago
Next Article