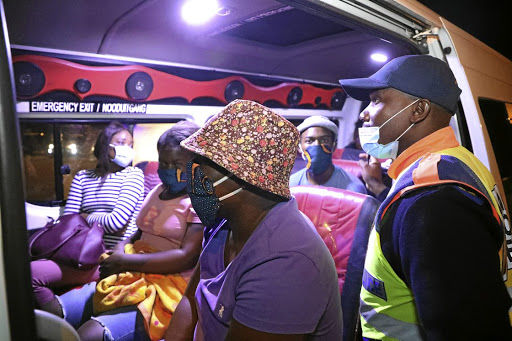 A traffic officer scans a taxi for signs of any violation of lockdown laws at the N1 roadblock at the Carousel Toll Paza.
Image: ANTONIO MUCHAVE

On a chilly Friday night near the Carousel Toll Plaza, north of Pretoria, a contingent of about 100 police and traffic officers, nurses and SA National Defence Force medics are hard at work at a major roadblock.

Red and blue emergency lights are flashing along a stretch of the N1 beyond the toll plaza, to intensify the battle against the spread of coronavirus infections.

It's the first day of the seven-day grace period in which travelling between provinces is permitted for nonessential work in over a month.

For some drivers on the road it's time to panic, start rolling down the windows and fumble as nurses armed with flashlights, surgical masks and gloves point a thermometer gun at their foreheads.

Traffic volumes were unexpectedly low at the usually busy toll plaza. At around 8.30pm, Tibane Manganye was pulled over and taken for screening at a mobile clinic run by a nurse and an SANDF medic.

Workers fear for safety as they return

A nervous Manganye listened intently as officers asked questions about his travel.

"Do you know what time is it?" asked one traffic officer.

Manganye said he was not aware of the curfew imposed from May 1, prohibiting the movement of people between 8pm and 5am.

"I wasn't listening to the radio and I haven't watched the news today because I have been driving," he said.

The 36-year-old was one of thousands of people who were stuck in different provinces due to the restrictions of lockdown level 5 on interprovincial travel. Now South Africans have been given a seven-day window to travel beyond provincial borders during level 4 of the lockdown. 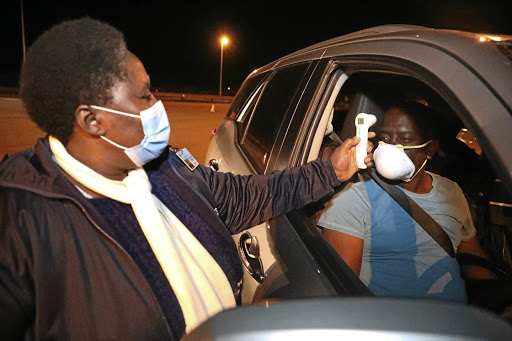 Sister Jenny Maluleke from the department of health screens motorist Jerry Ngoepe, who was travelling from Limpopo, at a roadblock.
Image: ANTONIO MUCHAVE

The roadblock where Manganye was pulled over is one of many that are expected to be set up at the entry points of Gauteng where screening is done and compliance checked.

Manganye and his family had travelled to Limpopo on March 26, the day the lockdown was enforced. He works in Gauteng at Security Management Services and said his annual leave was booked prior to the countrywide lockdown.

"My wife needs to return to work. Her boss called her that she must come back because the lockdown has been relaxed and that we could travel back," he added.

Standing about a metre away from Manganye, Jenny Maluleke, a nurse from Pretoria West Hospital, fired screening questions.

"We went to Limpopo because we wanted to spend time with family ... I thought it would be safer for my family," Manganye said.

Maluleke had screened hundreds of travelling motorists on the day, but she was yet to refer anyone for testing.

"We don't just test anyone. We are guided by the screening process. If someone feels like they have one of the symptoms we test them here [at a mobile testing facility at the roadblock] and they get their results within the next 48 hours," she said

"Taxis are a bit problematic because they get here with more passengers and are risking their lives.

"We can screen 1,000 people and only test two or three people. There is no formula to it, but we need to be thorough."

The mother of two said it has been challenging working at the forefront of the fight to contain the spread of the virus.

"I do not want to take this virus home to my family. I live with my mother as well and she is 79 years old. I know what this virus does to elderly people and that's why I try to be as cautious as my job allows me to be."

At 8.55pm Sibusiso Mpanza, a medic with the SANDF, is exhausted after spending over 12 hours at the roadblock. 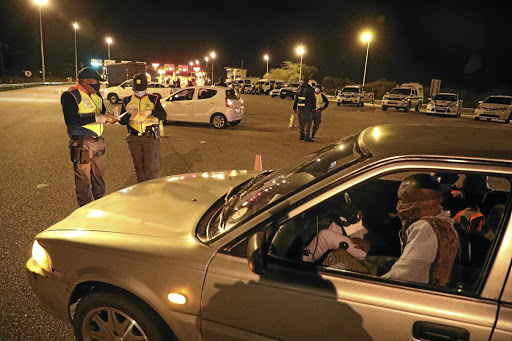 Traffic officers go through their routine checks on the N1 at Carousel in Hammanskraal, north of Pretoria.
Image: ANTONIO MUCHAVE

"It's not an easy task because you never know who might have it (Covid-19).

"We take as many precautions as we can. I have accepted that I might contract this virus, but there are always casualties, especially in the front line," said the 30-year-old.

Mpanza spent years on peacekeeping missions in different countries on the continent, but he said this has been the most difficult mission he has been involved in.

As Mpanza spoke to Sowetan, a silver vehicle with five occupants was stopped. It's driver Jerry Ngoepe panicked and scrambled to put on a disposable mask. In his haste, he wore the mask incorrectly.

"My wife and I need to return to work tomorrow and we could not leave at a later date. The virus is real and we understand it but I couldn't leave my children at home," he said.

The civil engineer said he left Gauteng on March 26 as well and had spent the past month in his home village.

"We received an email that we can return to work from Monday (today). The company said there would be no need for [permits] because this is a grace period for people who left the province to return so we can go back to work."

Employers must take measures to protect the health and safety of everyone in their workplace as some companies resume operations under stage four of ...
News
1 year ago
Next Article