Lockdown a blessing in disguise for homeless man 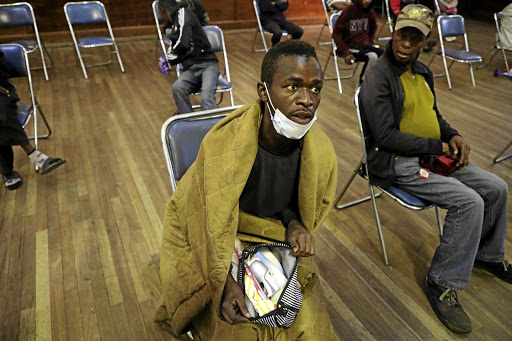 Bongumuzi Dlamini, a homeless man from Benoni, East Rand, is more than happy to be housed at the shelter. . / Thulani Mbele

The 21-day lockdown has given Bongumuzi Dlamini an opportunity to have his first proper bath in over a year.

Dlamini, who is homeless but is currently housed at a shelter in Benoni, Ekurhuleni, was among a group of 120 homeless people who were screened and tested for coronavirus yesterday.

Dlamini, who arrived at the Benoni Town Hall yesterday morning, said he felt safe and well-taken care of while being protected from Covid-19 on the streets of Boksburg where he lives. "I ended up in the streets after I got kicked out of my flat because I couldn't afford rent anymore," he said.

Dlamini, originally from KwaZulu-Natal, said he came to Johannesburg five years ago and found a job.

"It's scary and we are more vulnerable as people living in the streets. At least I can have a peace of mind for as long as I'm accommodated here."

Another homeless person, 20-year-old Nicole Debeer from Boksburg, said being housed at the shelter meant that she can have some rest from hustling for survival in the streets. "There's no rest in the streets, we have to hustle for every meal and our next smoke," she said.

Debeer conceded she was a drug addict. However, she said with the lockdown it had been hard to get a smoke because stores and many public places where she hustled for money were closed.

Team leader of the shelter, Vivian Matime, said overcrowding was the problem. "We are now sitting at 125 people and we were meant to only take 120. So we will now be transferring new arrivals to other shelters because people keep on coming in," she said.

Homeless will not be housed in school hostels in Gauteng

School facilities including hostels will not be used as shelters for the homeless during the lockdown, after legal opinion was obtained.
News
2 years ago

Cape Town changed its lockdown plan for 4,000 homeless people on Thursday and will now accommodate all of them in tents at Strandfontein Sports Ground
News
2 years ago

Lesufi hits out at SGBs for refusal to house homeless