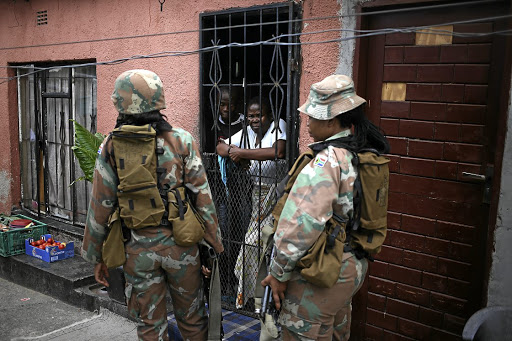 Members of the security forces patrol the streets of the inner city of Johannesburg and Alexandra township to enforce the nationwide lockdown to halt the spread of the Covid-19 virus. /ALON SKUY

The presence of police and the army in townships is triggering. This is a fact that we have to accept.

It doesn't matter that the army, in particular, has been deployed more for humanitarian reasons, to help enforce a lockdown in response to a public health crisis.

Many who lived through apartheid and young people who grew up in townships through the instability and violence of the '80s have a vivid memory of the heavy-handed approach of the security forces then.

The reports of youths defying the lockdown and facing off with soldiers and police is a re-enactment of past incidents where the people and police have found themselves on opposing sides of the Struggle.

Today the struggle is for an escape from persistent poverty. It is a struggle for survival in the face of uncertainty about today's meal and tomorrow's shelter.

The talk of hygiene and social distancing is almost a nonsense in the context of an informal settlement where people are packed like sardines in tin can houses with little to no openings for ventilation, except a makeshift doorframe.

Staying home, especially as a breadwinner, is to subject yourself to expectant faces of dependents - children and adults - you will not be able to avoid at the end of the day when you have nothing to show for many hours of daylight spent sitting pretty.

These are already individuals on edge, bedevilled by anxiety and tension, with limited reason to hope, beyond what the hand can grasp to give to the mouth. For them it is not a month-to-month existence but a day-to-day battle to uphold and retain their human dignity.

On day one of the lockdown, townships like Alexandra continued with business as usual. In some media reports the people in these places were castigated for treating the lockdown as a holiday.

But the shock at the ongoing activity in these localities is misplaced. It is an eventuality that authorities should have anticipated given prevailing conditions, especially in informal settlements.

Ministers in the security cluster have called on the public to cooperate with law enforcement officials. In recent addresses and interviews they have warned residents in the cities and townships against provoking officers.

A SA National Defence Force member was injured and admitted to hospital after a military vehicle crashed in Mthatha, Eastern Cape, while trying to ...
News
1 year ago

Trained soldier and Baroka striker Richard Mbulu has advised residents to abide by the regulations of lockdown as more incidents of clashes emerge ...
Sport
1 year ago

But the question is whether members of the SANDF and SAPS have been sufficiently conscientised to the psychological effect their presence in the socioeconomically repressed communities could potentially have?

To what extent have they been briefed to be aware that their very uniforms and the big guns they wield are provocative? The outbreak of a dangerous virus like Covid-19 does not suspend psychosocial impressions left by past encounters with security forces.

Criminalising residents is not going to go far in repressing the urge, never mind deterring the acts, of defying lockdown regulations. The problem is not civic disobedience thus the solution cannot be merely to enforce the law and make arrests.

Together with the economic cluster, minister of social development Lindiwe Zulu and her team need to devise practical ways of ameliorating the tangible effects of the lockdown on the unemployed, informal traders and piece job workers of informal settlements and townships, as well as the homeless.

Security personnel have their role and place, but it is a secondary one. In this instance, it is the social services of the government response that needs to be given greater prominence.

The role of the department of social development needs to be expanded beyond providing temporary shelter and ensuring the continued payment of social grants to those already recipients.