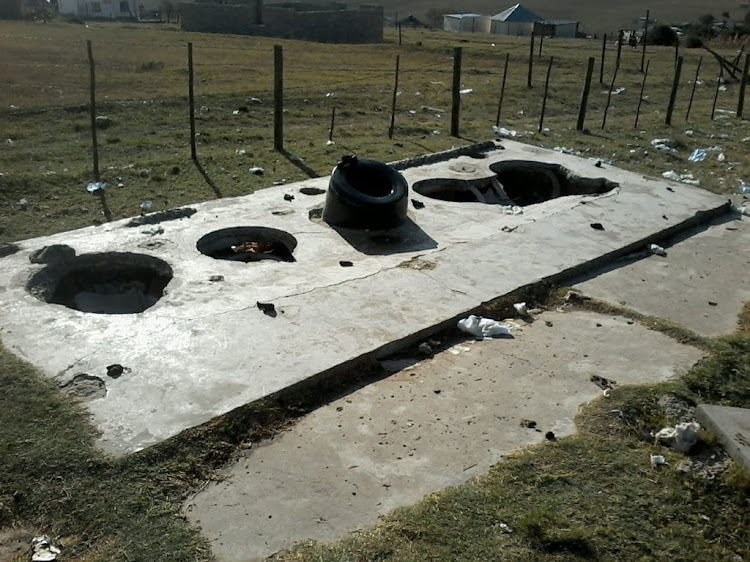 Lutholi Junior School near Mthatha made headlines last week when a learner survived falling into a pit toilet.
Image: Equality Education via Twitter

The Eastern Cape education department has given a Johannesburg-based contractor two weeks to report back to site and finish construction at a rundown school.

DispatchLIVE reported last week that a six-year-old boy at Lutholi Junior School was lucky to escape with just a few bruises after falling into an old pit toilet.

The school is situated in Sibangweni village, just outside of Mthatha.

Department spokesperson Mali Mtima said the matter was never directly reported to them. He said they received information through a "passing statement".

According to advocacy group Equal Education, school staff make use of toilets in the nearby houses of community members, while learners relieve themselves outside in the open or on the floors of the dilapidated toilet block.

"Contractors were initially asked to build flush toilets but the school has no running water and currently makes use of water tanks. The plans were then changed to the building of VIP pit latrines, but the construction of those was halted after only two days," said Equal Education.

Mtima confirmed that R3.7m had been allocated to upgrade facilities at the school. "Of that, refurbishment includes fencing, toilets and sanitation," he said.

"The contractor abandoned the site, but last week we agreed with him - we are giving him two weeks to report back to site - through our legal guys.

"We expect him to be at work any time from today [Monday]. He agreed on our telephonic conversation that the work is going to be finished, so that at least by January the learners can return to the school with the completion of the toilets and the fencing."

Today we hear a learner fell into 1 of these holes! Open air pit latrines at Lutholi Junior School, Eastern Cape, photo taken +- 3 weeks ago. Unlawful & immoral! Parents have marched to @ecdoeza.“Toilets” in this state since at least 2016. When will government #FixOurSchools?! pic.twitter.com/NhF4qjEUTd

Missing girl, 4, raped and killed after being lured with sweets

A four-year-old Bloemfontein girl, who was reported missing on Sunday, was found dead in a pit toilet on Thursday. She had been raped.
News
2 years ago

Scores of angry residents have descended on the Masoyi magistrate's court near Hazyview, Mpumalanga, baying for the blood of an alleged serial ...
News
2 years ago

Parents at a Limpopo primary school are calling for action against the principal who allegedly ordered a group of pupils to empty toilets.
News
2 years ago
Next Article