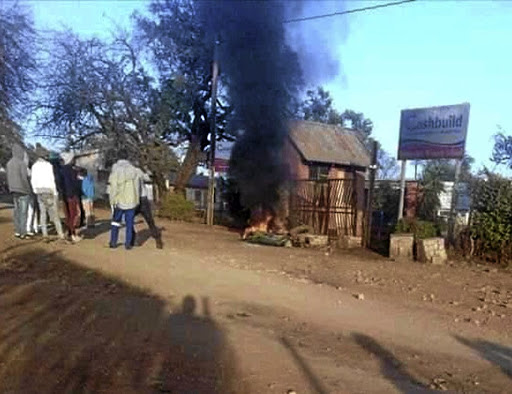 Pupils at Mpumelelo Primary School in Middleplaas outside Malalane, Mpumalanga, missed the first day of schooling yesterday after their parents protested for better classrooms and toilets.

The parents took to the streets and barricaded roads with burnt tyres and rubble, saying they were tired of empty promises from the department of education.

The school has mobile classes which have been provided by the department, but the community said they wanted these removed to show that it was willing to build them a better school.

"We can't have our children learning in unsafe structures; that's why we had to stop them from entering [school premises] today. These buildings are as old as me. I studied in here, with those cracks," said one parent, Muzi Masuku.

"Then the department keep on promising to build a school, but brought mobile classes. It has been more than four years, which means they don't want to build classrooms here."

Last year, the school was hit by a strike over the same issue and a 15-year-old pupil was shot in the arm during the protest.

The protest came after a nine-year-old pupil fell into a pit toilet at the school and was rescued by other pupils and community members.

Yesterday, pupils could not go inside the school.

The department of education has called for the parents to be patient as it is starting to build the new school in the next two months.

"We urge the parents to be calm as the department has prioritised the construction of Mpumelelo Primary School. It's being approved table five B5, the construction of 16 classrooms, admin block, laboratory and a kitchen for the 2019/2020 financial year," said education spokesperson Jasper Zwane.

"The process to design the new structures has been completed and it is anticipated that a contractor will be appointed in the next two months."

Meanwhile, to enhance pupils' access to safe infrastructure schools, the department of basic education has committed to practical completion of 16 inappropriate schools and 41 sanitation projects in a period of two months.

This was heard as the department made its first appearance in parliament before the portfolio committee in the sixth administration yesterday.