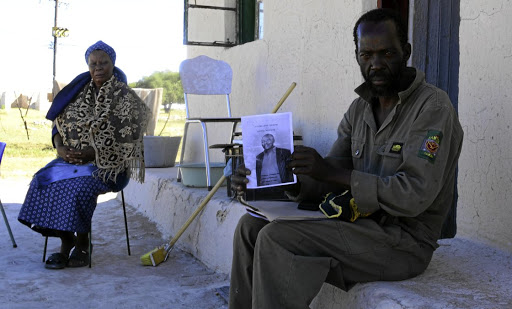 Maria Kepadire and Themba Dlavane speak of the death of Itumeleng Joseph 'Oupa' Dlavane who died while building a pit toilet at Bodibe village outside Mafikeng. /Tiro Ramatlhatse

The family of a 57-year-old pit toilet digger who died mysteriously at work has been given hope that they could receive compensation.

Itumeleng Dlavane died in a pit toilet he had been digging three weeks ago in Bodibe village, outside Mahikeng, in the North West.

His family had expressed concern that Dlavane's employer Cem Force, a company appointed by Ngaka Modiri Molema district municipality to erect ventilated pit toilets, was quiet on whether they would pay compensation or not.

The company had also not reported the March 12 incident to relevant authorities, provincial department of labour spokesperson Botsang Huma said.

It was only after Sowetan published the story on March 27 that the provincial department of labour became aware of the incident and started a probe.

Huma said they had since established that Cem Force is registered with the Federated Employers Mutual Assurance Company (Fema).

Fema is responsible for transacting workmen's compensation insurance for the building industry.

There are hundreds of other schools across SA without proper sanitation.
Opinion
2 years ago

Pupils at a North West primary school, with the help of parents, have been draining human waste from their toilets.
News
2 years ago

"They promised to do things by the book. They said they only need to send proof and details of what had happen (when Dlavane died) to Fema before the compensation process can start," he said.

Cem Force manager Wikus Dedrick could not be reached for comment yesterday.

So far, two employees, including Dlavane, have died at the site. The other employee also died last month.

Huma said the department would conduct an inspection on basic conditions of employment at Cem Force sites to check if they were compliant with labour legislation.

"We have advised the employer to report the matter to Fema before end of business, April 3, 2019 and share evidence with the department of labour," Huma said.