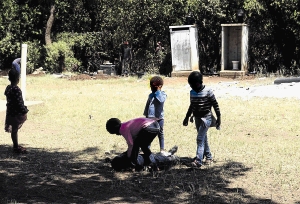 Pupils at a North West primary school, with the help of parents, have been draining human waste from their toilets for the past 18 months.

They have been undertaking this task without protective clothing or face masks so that they would be able to use the toilets again. Phakisang primary school in Ottoshop, about 35km outside Mahikeng, has four bucket toilets that have to be emptied monthly as there are no proper ablution facilities.

School governing body chairperson Tumalano Motswaiso said: "We cannot continue like this. You should see them [the toilets] when they are full. A child cannot even sit, it's just inhumane."

This all began when the five flushing toilets at the school started leaking as the pipes burst in August 2017.

The floor collapsed and Saphepha fell into a pool of mud and human waste.
News
3 years ago

At the time, the department of labour issued an instruction that the toilets were not in a condition suitable to be used by pupils and they were permanently locked.

Motswaiso said after informing the provincial education department and asking it to fix the toilets, they were told there was a backlog. As pupils were forced to relieve themselves in the bushes, he said they decided to ask a local contractor for help. The local contractor then donated four bucket toilets.

Motswaiso said although they were grateful, the challenge started when the local municipality informed them its sewage trucks would not be able to drain waste from the toilets because they did not have the equipment to empty that model of toilet.

Parents then decided to take turns on a monthly basis to empty the bucket loos at the school, which has about 580 pupils.

On Friday, desperate parents decided to demolish the four toilets and dig two pit latrines, which they hoped may be easier to manage.

Although they still felt that pit toilets may place their children's lives at risk, they believed that it was the only option they had.

One of the parents, Ontiretse Mosweu, who also came to dig the new pit toilets, said they hoped they would be able to use chemicals to burn waste in the pit latrines.

"We won't have to use the small buckets to drain it anymore.

We will donate money and buy strong chemicals, which we will use on Fridays after school when the children are not here," he said.

He said they would be happy if the government could fix the old flushing toilets.

"Our children have the right to a decent environment and schools must be where they learn to become better people," he said. Parents also complained about overcrowding and the dilapidated school building. North West education spokesperson Freddy Sepeng said the department would attend to the matter before the end of the year.

"There is a national deadline to eradicate pit toilets in all our schools. We would have fixed the situation at Phakisang by that time," he said.