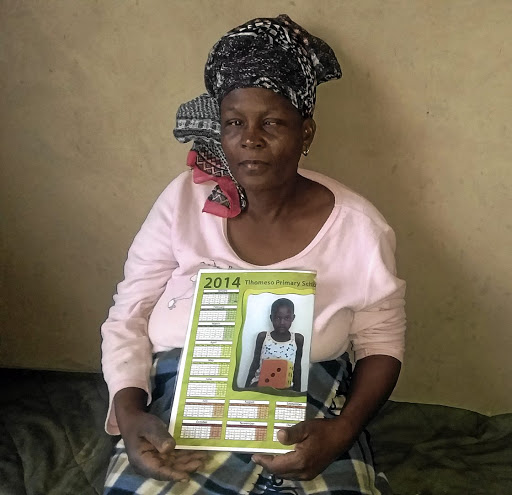 Mmapholo Mono holds a picture of her daughter, Tlhalefo, whose remains were found in a toilet. /Boitumelo Tshehle

A mother's suspicion helped police nab her son and his friend for the rape and murder of an 11-year girl.

Tlhalefo Mong's body was found in a pit toilet on Friday with her arms and legs bound with a rope.

She went missing last Sunday, causing the community of Gopane village near Zeerust, North West, to launch a massive search for her.

Her lifeless body was finally discovered on Friday after a mother had told Tlhalefo's family that she suspected her own son of involvement in the case as he had arrived home with blood on his shoes and the bottom of his trousers.

North West police spokesperson Captain Aafje Botma said two men, aged 24 and 25, were arrested and charged with the rape and murder of the girl.

Botma said the two were expected to appear before the Lehurutshe magistrate's court today.

Tlhalefo's mother, Mmapholo Mong, told Sowetan that one of the two men charged with murder of her daughter was a family friend who they treated like a part of the family.

She said the suspect's mother on Wednesday had told them she suspected her son because of the blood on his shoes and the bottom of his trousers.

"She said he washed the trousers without giving her any explanation after she asked," Mong said.

The family reported this to the police on Thursday. When the police went to look for the suspect on Friday, he ran away when he saw the police van.

Botma said the suspect was arrested with his accomplice later that day.

"He needs to tell me why he did that to an innocent girl. He needs to explain to me because I am going insane," Mong said.

Tlhalefo went missing on Sunday after she left home to visit her aunt in the same village and did not return.

A 36-year-old man accused of raping his 14-year-old stepdaughter and exposing her to pornographic material has been remanded in custody by the ...
News
2 years ago

Her mother said while they were searching, several residents became concerned by a stench coming from a toilet in a dilapidated house near her sister's house.

"One woman went to check and came back to say she could see something that looked like a body inside. Police called pathologists, who confirmed there was a corpse.

"I was told by my sister that her body was found with lots of cuts. I did not have the guts to look at it. It was too painful," she said.

She said they were now waiting for postmortem results as pathologists were still investigating the cause of death. They did, however, tell her that part of her daughter's brain was missing.

"After telling me why he killed my daughter, then I will be handing him over to the angry community members who spent sleepless nights looking for my daughter. I don't care what will happen to him after that," she said.

Tlhalefo was a grade 5 pupil at Tlhomeso Primary School and wanted to be a social worker.

"Shy as she was and quiet as she was, she had a good heart and liked helping others, that is why I agreed that being a social worker would suit her," Mong said.