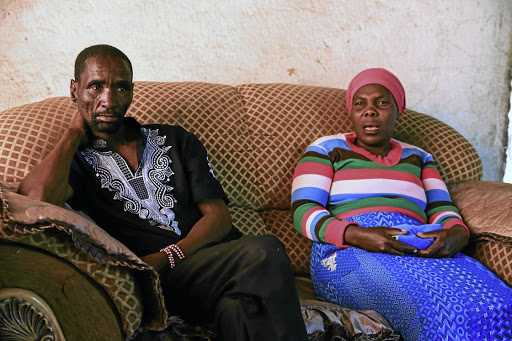 James and Rosina Komape are fighting for fair compensation after their son's death.
Image: Simphiwe Nkwali

The case of five-year-old Michael Komape - who died after falling into a pit toilet and drowning in human excrement at a school in Limpopo - is heading to the Supreme Court of Appeal (SCA).

NGO Section27‚ which is representing the Komape family‚ confirmed in a statement on Wednesday the case will be heard on September 2.

The family was seeking more than R2m for special and constitutional damages‚ funeral costs‚ and loss of income for Michael’s mother‚ Rosina Komape. She lost her job as a domestic worker soon after the accident.

Judge Gerrit Muller ruled in the Polokwane High Court on April 23 2018 that government violated pupils' right to basic education by not providing them with safe and decent sanitation‚ but dismissed the damages claim.

"The case remains deeply emotional and difficult for the Komape family. We hope that the SCA appeal is the end of a very long road towards closure for the family‚" Section27 spokesperson Zukiswa Pikoli said in a statement on Wednesday.

The High Court in Polokwane has dismissed claims for general and constitutional damages sought by the family of Michael Komape.
News
4 years ago

The advocacy group representing Michael Komape's family in the lawsuit against the state has vowed to appeal directly to the Supreme Court of Appeal ...
News
4 years ago
Next Article