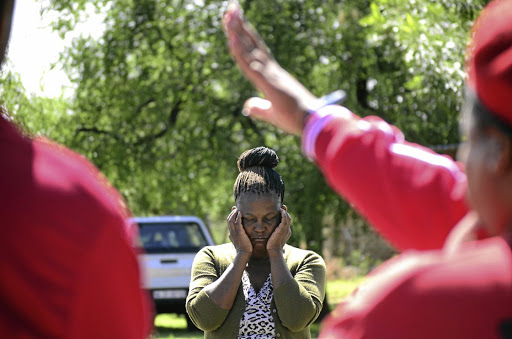 Mmapholo Mong is mourning the death of her daughter Tlhalefo, who was found murdered and dumped in a pit toilet in Gopane village in Zeerust, North West. / Tiro Ramtlhatse

The family of an 11-year-old girl has revealed details of how she was suffocated with a pillow shortly after she told her rapist that she would report him to her parents.

Tlhalefo's body was retrieved from a pit toilet on Friday. She had been missing since March 31. Her aunt Kabelo Moagi said the investigating officer visited their family home in Gopane village outside Zeerust, North West, and shared shocking details contained in one of the accused men's confession statement.

She said according to the officer, not only did Ofentse Selemogo, 25, confess to the crime but he also gave details of what happened.

"He confessed to raping her and suffocating her with a pillow before throwing her into a pit toilet," Moagi said.

She said the police officer told them that the accused revealed that after raping Tlhalefo, the girl told him that she was going to tell her parents and out of panic, he killed her.

"We are traumatised. It was too much for us because she knew the perpetrator. He was our neighbour and came to our home every day to watch TV," she said.

Moagi said Selemogo also allegedly confessed that he then approached his co-accused Phenyo Sebogodi, 26, to help him dump the body into the toilet. "We hope justice will be done. We hope the two will not be released on bail," she said.

The family of a 57-year-old pit toilet digger who died mysteriously at work has been given hope that they could receive compensation.
News
2 years ago

The duo briefly appeared in the Lehurutshe magistrate's court yesterday on charges of murder, kidnapping and defeating the ends of justice.

Tlhalefo's mother Mmapholo Mong, who attended the court proceedings, said: "They [police] used a caterpillar to retrieve her body and I hear there was a terrible smell.

"I wanted to look into their [accused's] eyes to see whether they are aware of the pain my daughter might have gone through and the pain that I am going through right now."

Prosecutor Zola Mpayipheli asked for a postponement for further investigations.

He said he also needed a copy of the postmortem results as he wanted proof that the girl was raped before being killed. Once confirmed, this would be added to the charges.

However, Moagi said there was nothing to investigate because Selemogo had confessed. The case was postponed to next week for a bail application.

The community and EFF members filled the court to capacity. Community member Boitumelo Pheloane said: "We need to stop this. We cannot be in the news because one of our own has been killed by neighbours."

Social development MEC Fenny Gaolaolwe said her department would provide counselling to the family and to Tlhalefo's schoolmates.

"Our social workers will compile a home circumstance report that will determine departmental intervention at the deceased family beyond the funeral," she said.