The official handover of the ceremony in the Northern Cape by MEC Lebogang Motlhaping
Image: Department of transport

A mother of six who was handed a new shack by the government is grateful for the gesture but she says she still needs a proper house.

Yesterday, Dimakatso Serai, 38, spoke out for the first time after images of Northern Cape transport MEC Lebogang Motlhaping cutting a red ribbon at the official handover of her three-room shack in Inkandla settlement at Hartswater went viral.

Serai, whose plight was picked upon by the department after her 10-year-old son Refentse died in a school bus accident, had been living in a dilapidated one-room shack.

"I am grateful for the gesture. It was necessitated by the death of my child in February, I never asked for help.

"I suspect that ER Mocwaledi Primary School, where my kids attend, facilitated this," Serai said.

"There's now enough space for all my six children. I am asking myself why they didn't bring furniture as there's so much space available now."

Serai's new home has no toilet, running water and electricity. She said she still uses a pit toilet.

The department took down pictures of the official ribbon-cutting ceremony and handover of the shack from its social media page after public outrage. 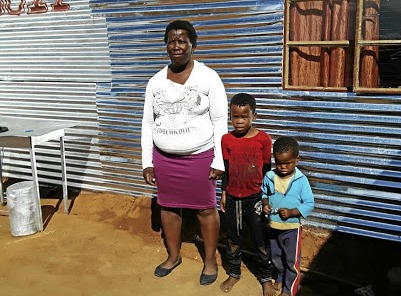 In a statement released in response to widespread criticism the department said the donation was a "humanitarian gesture".

It said it had partnered with the education department and De Beers to intervene based on the limited resources available.

"We agreed to build a temporary and decent structure to temporarily house the family, which they did not have," it stated.

Officials had gone to the area to also unveil a recreational facility at the ER Mocwaledi Intermediate school in memory of the late Refentse and agreed to donate school uniform to the school. Officials claimed arrangements were also made to secure employment for a member of the Serai family.

But Serai denied this.

Abahlali baseMjondolo activist Mqupheli Bonono slammed the department, saying that moving a family from one shack into another was unacceptable.

"It is shocking. We have experience of government playing around with people when it gets to election time. You can't move a person from a shack into another shack. It shows no dignity," Bonono said.

He said it was not enough to tell the family that the shack would be a temporary dwelling.

Homeowners at Rustervaal in Vereeniging took to the streets on Friday to demand the removal of an informal settlement that had mushroomed nearby.
News
3 years ago

"There are many communities who have been trapped in temporary accommodation for over 10 years.

"They were promised housing but they are still there," Bonono said.

Land Access Movement of SA chairperson Mangwedi Maredi said the shack was not sustainable in the long run.

"Why should we talk about temporary things for people who are indigenous to SA. This is not right," Maredi said.

Head of the provincial government communications in the office of premier Sylvia Lucas, Monwabisi Nkompela, declined to be "drawn into the controversy".

ANC provincial spokesperson Naledi Gaosekwe also said the party had no stance on the matter.

Repeated attempts by Sowetan to reach Motlhaping were unsuccessful as his phone went to voice mail.