'An angry society is hard to police' 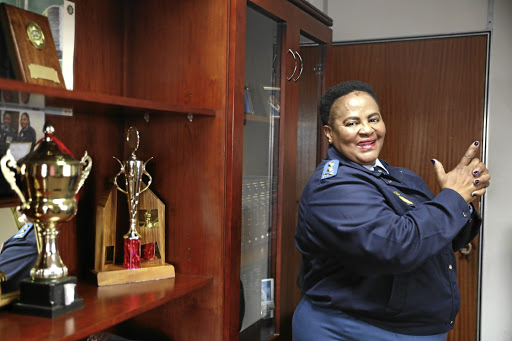 Two hours after attending to a murder scene of one of her juniors, Maj-Gen Zodwa Molefe sank in her chair and lamented the violent crimes in her cluster.

The Sedibeng district commissioner was left numb by the murder of Const Fhedzisani Mudau, 32, who was on a crime prevention operation when she was stabbed to death.

"Violent crime is a result of an angry society. It's something that is hard to police. We can prevent crime, but an angry society points to other symptoms that are beyond crime," said Molefe who has been a cop for 34 years.

"It saddens me when one of my most junior members becomes a victim of that while carrying out their duties."

Molefe is the only female district commissioner in Gauteng and oversees 12 police stations. Her district stretches from Vanderbijlpark to Orange Farm and might soon also include Heidelberg.

Cop murders on the rise again

Two suspects wanted for the murder of a Dobsonsville policeman have been shot dead, police spokesperson Brig Vishu Naidoo confirmed.
News
2 years ago

"When I joined the police at the Hammanskraal Police College, I realised that there weren't enough officers dealing with issues that women were facing. It was only right for me to take on the challenge and make a difference.

"I have a strong team . What I am most proud of is that eight of the 12 stations are headed by women. They are doing very well, they are dedicated and committed and know what they are doing," said the 56-year-old mother of two children.

"We are working on curbing taxi violence in our district because we have a problem in that regard. We also have a problem with the hijacking and robberies of courier vehicles. But what is most disturbing is the brazen manner in which house robberies are carried out. It doesn't matter if there are people in the house and whatever time of the day, criminals simply do as they please. Those are the key areas we are focusing on improving."

Molefe said her rise through the ranks was due to dedication and hard work. "I want to have an impact on young police women. They need to understand that this a career and if they treat it as such, it will bear positive fruits for them."

A second officer has been shot in Gauteng in a space of days.
News
2 years ago

Man arrested for 'spreading lies' on Facebook about cop in Mpumalanga

A 22-year-old man is in custody after appearing in Bethal magistrate's court on charges of crimen injuria and incitement to commit crime after ...
News
2 years ago

An off-duty Johannesburg metropolitan police department (JMPD) officer and a bystander were shot dead in Vlakfontein on Sunday evening.
News
2 years ago
Next Article