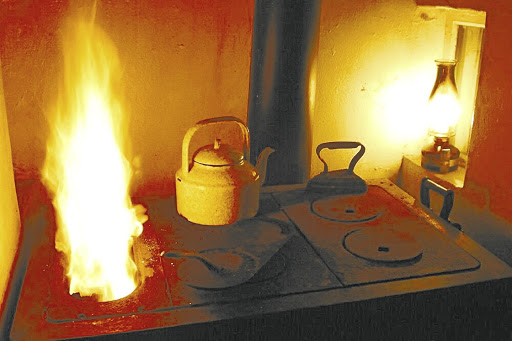 An old-fashioned coal stove provided warmth and nostalgic moments for many growing up in the townships and, unlike modern gadgets, was built to last.
Image: Desmond Scholtz

A tear dropped down from my eye. I was visiting Mme (my grandmother) during varsity holidays when she told me Baba had sold the stove. The black Magic stove was not an ordinary stove. It was the stove of my childhood with many memories built around it during the winter months.

For years it held pride of place in the corner of the kitchen. We'd fire her up with wood or coal. We'd bake potatoes in the red-hot coals or toast bread in her oven.

Many a story I heard by her side remains with me to this day. Magic was so well-behaved, she never even smoked in the house but pumped all her smoke through the chimney.

This is the stove where I policed cakes when Mme baked for Christmas. This was the stove that kept me warm when I bathed in a waskom placed on a wooden bench to prepare for school.

During the summer, Magic would be rested while the paraffin primus stove took over the cooking responsibilities. Even then, Mme kept it shining at all times. Since the advent of electricity, it had been parked in the shack at the back of the house, gathering dust. The stove was sold for a pittance to those bakkie-driving umlungu scrap-metal dealers.

Surely, Baba could have consulted me, his older grandson about stofu sam samalahle inheritance.

Skopo has been part of life in the townships.
Lifestyle
3 years ago

That stove represented more than just a piece of metal to me. It stood for sturdiness and durability.

I knew my grandfather never drove a hard bargain so I did not even bother to ask how much he sold Magic for.

I thought of Magic this week and how she has probably been melted to create something of less consequence. As the Black Friday queues snaked, I knew none of those 'bargain' gadgets and hardware would last for 12 months.

These days everything is produced to wear out quickly. Just think about the screen of your smart phone and how often it has cracked and cost you to replace it. The manufacturers know very well the vulnerability of the current screens but none has bothered to make it fall-proof.

It's all about economics and profits. Those who repair the screens have made a fortune from our misfortune. Don't even get me started about the fibreglass of the latest cars. My car sustained a nasty dent when I hit a mosquito at high speed one angry night.

Even clothes are no longer designed to last. Fast fashion has seen clothes discarded after six wears. Some products only last two or three washes.

This is terrible for the environment as materials used are often synthetic and non-biodegradable.

Most people do not know the hazardous chemicals used to colour their pair of jeans but will not hesitate to throw them away when it fades. Things are so bad that in Australia they have come up with "clothes libraries" to persuade shoppers to rent instead of purchasing clothes.

Personally, I wear my jeans until my bum peeps through a hole before I reluctantly discard them. I could tell you about underpants but who needs a pair in this heat?