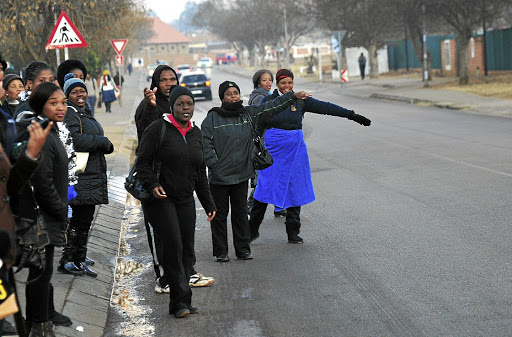 Let the people choose how they want to travel, but taxi men do not believe in this freedom of choice which is spelled out in the wonderful constitution of SA, says the writer.
Image: Veli Nhlapo

We left the mountain kingdom of Lesotho in the morning after a hectic weekend. I was still jaded from the hospitality of my blanket-wearing hosts in Maseru. Before we exited the border, we filled up the tank with reasonably priced petrol.

Although I'm told it is not safe to do so, I asked the attendant to shake my car like taxi drivers do to ensure the tank was filled to the brim. At R12.56 per litre, Lesotho is a motorist's paradise compared to South Africa.

I was about to take a nap before taking the wheel halfway to Johannesburg when I spied three bosomy ladies thumbing a ride as we left Ladybrand. I was suddenly wide awake and shouted at my driving companion to stop for the lasses.

I jumped out to help them put their luggage in the boot and welcomed them with a smile. They were headed to Bloemfontein. I fiddled with the stereo and searched for Babyface in my USB because the balladeer had previously served me well in eking out a cellphone number from a prospective lover.

Suddenly, we saw a taxi coming at full speed in the rear-view mirror. There were four brutes inside as it overtook us and blocked our path, forcing us to stop.

Our crime? Giving those ladies a ride. I could not believe my ears but arguing with omageza (taxi drivers) is like asking Juju to leave Jacob Zuma alone. Their logic was their industry was suffering losses if passengers chose to thumb a ride.

We need to encourage our young to venture outdoors to play in pursuit of a healthy living.
Lifestyle
3 years ago

I lamely told the dunderheads the ladies were our girlfriends and their sister but apparently they had been hiding behind the bush and saw us pick them up. For their part, the ladies argued it took forever for a taxi to get full and the fare was steep.

My logic was that any traveller had the right to decide on their mode of transport. After all, that's what freedom is about but omageza never got the memo.

This was not the first time I'd seen motorists accosted for picking up hitchhikers. I've seen it in Mahikeng and Klerksdorp, Modimolle and Polokwane, Welkom and Kroonstad. In some areas, traffic officers will even impound your vehicle if you give a hiker a ride.

With reluctance, I helped my ladies load their bags into the skorokoro taxi, which made a U-turn and took them to the Ladybrand taxi rank.

The freedom to decide where you spend your money is underrated in this country.

This week, vandals looted Somali and Pakistani-owned spaza shops under the pretext they sold fake or expired products. The campaign had been bubbling on social media with pictures of brands allegedly faked by the foreign shop owners.

For instance, Inkomazi was misspelled Inkomozi on some containers that looked like the original sour milk.

Lo and behold, the hooligans took their haul, which they'll no doubt consume with glee when they get home, fake or not. The irony boggles the mind and it has never occurred to these customers-cum-looters that they could vote with their feet and ditch those spazas instead of committing a crime.