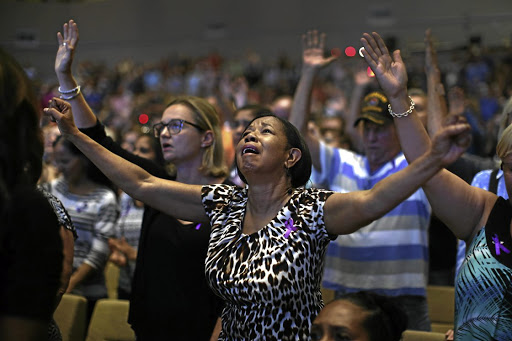 These congregants are clearly overcome by emotion during worship in church, a place the writer vows he'll never return to.
Image: Carolyn Cole / Getty Images

I haven't been in church in two decades. The last time I graced a place of worship, my intentions were not holy. I went there because this lady I was courting had asked me to. Although I grew up in church, I bailed out as soon as my critical faculties deigned I was being fed mumbo-jumbo. However, I retain ownership of the black book and occasionally thumb through it, depending on my mood. I particularly like that verse where Jesus turns water into wine.

So, I dressed up and accompanied Maureen to one of those charismatic churches with an organist. I did not know a single hymn so I hummed and smiled like an idiot when everybody raised their hands and swayed with the spirit. The pastor, dressed to the nines, regaled us with stories of how angel Lucifer was once a trusted sergeant in heaven and a conductor of heaven's choir. Lucifer's wings, he said, were made of strings that he would strum to make music. That was until he went rogue and tempted Eve with an apple and believed he was more powerful than God.

Trouble started when the pastor welcomed those of us who were in the house for the first time and asked us to stand. A few souls stood up while I remained glued to my seat despite Maureen's elbow digging into my ribs. Later, when the collection plate circulated, I threw a pinkies (R50) but quickly retrieved R40 change despite disapproving stares. Forty bucks can buy two beers and I am prepared to risk embarrassment for two quarts any day.

At the end of the service, I grabbed my lady and made for the door but the pastor was already standing guard to bid believers farewell. He caught me by surprise when he lunged at my offered hand and hugged me.

Need for school to teach looters how to feed at trough.
Lifestyle
3 years ago

I used the opportunity to ask him to put Lucifer's tracks on a USB. My lady was not amused and it would be the last time I go to church.

Be that as it may, bible punchers have found their way to my doorstep.

Three Sundays ago, I was woken up from a babbalased sleep at 9.30am. I always frown on anyone who wakes me up before 10am but the knocker was insistent. I hauled myself out of bed and staggered to the door in my underpants.

Two ladies and a guy stood on my doorstep with their books as I screwed my eyes without my spectacles. The matronly woman introduced herself and apologised for waking me up. She was bringing me the word of salvation but my gaze was fixated on the yellow bone whose eyes were fixed on my crotch as my head continued to thump.

I told them I only had beer to offer. They giggled with embarrassment when I invited the yellow bone inside to save my soul. They beat a hasty retreat, leaving me in sin as I walked to my fridge to get a cold one.