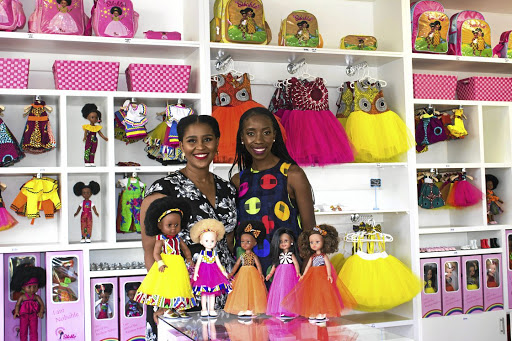 The creators behind Sibahle brand are Caroline Hlahla and Khulile Vilakazi-Ofosu.

Unlike troll-looking dolls that first hit the market years ago for girls of colour, the Sibahle collection is simply adorable.

They are also childlike in their features. The creators behind the brand are Caroline Hlahla (36) and Khulile Vilakazi-Ofosu (43).

It was the latter's daughter who at three years old asked to have a doll with a flowy hair.

"I looked at my daughter's toys and discovered that all her dolls indeed had flowy hair. She was asking for what she perceived as beautiful."

And so the process to create a doll in her image begun.

"It was important for us to make sure that the dolls are very childlike as we felt little girls needed to see themselves in the dolls. By creating too different an image of where the child is at their development stage, we felt was not appropriate for what our brand represents, which is that of affirming our kids to love themselves as they are," says Hlahla.

Helping kids to feel love and embrace who they are

Cape Town-born Yolanda Donkers dreams of the day when even Americans will speak of ordering a "Vangiwe" or "Gugu" doll. She says the term "Barbie" ...
Lifestyle
3 years ago

They designed the features and get the dolls made in Europe. "We first had them made in China but met with a lot of resistance where manufactures were unapologetic of the fact that they did not make black dolls. We were told black dolls are ugly and black dolls do not sell. It was at this point that we decided to try the European market. We felt comfortable with this decision as we wanted to be 100% sure that the dolls have passed the highest standards of quality."

The creators say the Sibahle brand is an inclusive one which seeks to unite the Rainbow Nation. "We want to teach kids tolerance of one another, to embrace and celebrate diversity. We also want to represent those that have been previously ignored by the beauty world and the toy industry."

They achieved this by recently introducing the vitiligo doll called Ndanaka, meaning "I am beautiful" in Shona. Zuri who has albinism is doing well for the brand sold as far as Russia and South Korea.

"These dolls are also helping create a much-needed dialogue about redefining beauty, embracing and celebrating each person's uniqueness."

Hlahla says all models have a name that translates back to beauty from Nobuhle to Bontle to Zuri.

They also added a doll of mixed heritage, Ayana, and Indian heritage, Neha, to the club.

They also sell Afro print tutu dresses for little girls to match to their doll of choice outfit.