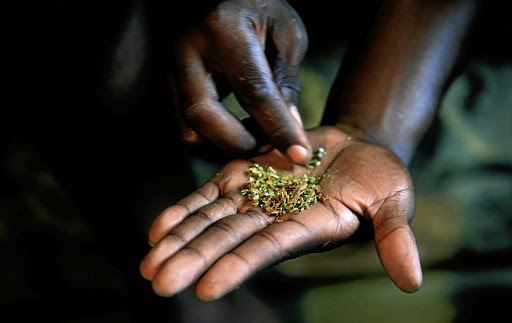 SA could be counting millions of rand through legal trade of marijuana. Dagga, as the herb is called here, has a great potential to boost the economy.
Image: Tebogo Letsie

When he was running for the White House in 1992, former US president Bill Clinton felt the need to disclose that he "did not inhale". He was of course talking about cannabis, or dagga as we call it in Mzansi.

In 2006, then Illinois senator Barack Obama riffed on Clinton's quote when asked about marijuana: "When I was a kid, I inhaled frequently. That was the point."

Like Obama, I once inhaled too. I was still a teenager when I stumbled upon a waskom full of the holy herb and grabbed a handful. I had taken the car battery we used to operate the black and white TV set for a recharge when I made the discovery.

The man who recharged batteries was also a peddler of insango. I was not shocked but rather curious and decided to grab the opportunity. I rolled a spliff and got high. I did not like the taste and decided to quit.

While ethanol remains my favourite vaporous depressant, I have friends who wouldn't hesitate to whip out a Rizla paper and puff away anywhere and any time.

Chester has even mastered the art of rolling a zol while driving. I would sit passively in the enclosed cabin and inhale the fumes and feel giddy.

Mpho in Cape Town was also a prolific smoker of the zol and would smoke brazenly while we walked to Teazers.

One night he threw away the stompie when we saw a police van approach, but ran back to retrieve his contraband after the cops went past.

Dagga is illegal in this country and has had a bad rap here for too long.

As a court reporter many years ago, I saw five guys accused of carrying a matchbox-full of dagga appear in the Soshanguve Magistrate's Court.

What a waste of scarce state resources, I thought.

With our economy in the doldrums, it is time for this country to be creative.

Just this week, the rand tanked by 16 cents to the dollar when President Cyril Ramaphosa confirmed that land would be expropriated without compensation.

Marijuana as an investment theme continues to gain momentum in the rest of the world and the herb can be grown at scale to help shore up our arthritic currency. The legalisation of the drug in some states in the US has seen some high margins from the dagga economy.

Uruguay, the only country in the world where marijuana is completely legal has the highest literacy rates in the world, with every child given a free laptop and Wi-Fi since 2009. The local climate from the Eastern Cape to Limpopo is suited to growing the holy herb and the gaping hole in SARS could easily be plugged if our legislators caught a wake-up call. Tobacco and booze are also responsible for many ills in our society and both are legal because they bring in billions of rands in taxes.

Coitus service providers or prostitutes should also be regulated so they can contribute to tax but that is a topic for another day. For now, we need to puff and pass.

How I was forced to tsipa and do the walk of shame.
Lifestyle
3 years ago
Next Article