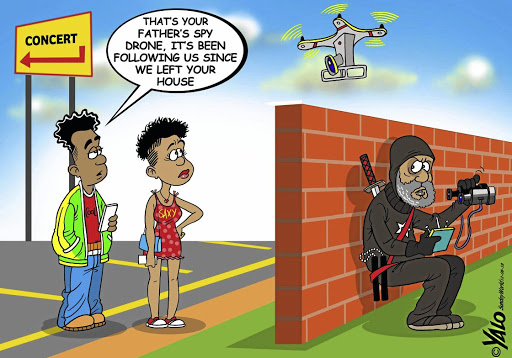 Despite all the concerns about women and children abuse, some fathers are still loving and protective of their daughters.

There comes a time in the life of every responsible man when he grows grey hair because his little daughter is growing up. I remember how my grandfather was stern with my sister Palesa when we were growing up and less strict with me.

One time Baba kicked out my sister's classmate when he came to help her with homework. His reasoning was that a boy would enter his house on proviso he was visiting Vusi, not Palesa.

While I was allowed to galavant and attend night events at the weekend, the old man made it clear my sister would not enjoy such privileges. It was unfair and she protested, but Baba wouldn't budge.

This week my Azania dropped a bombshell when she asked my permission to go to a music festival, Fill Up the Parking Lot, on September 1. Her friends would all be there and she has already bought a ticket with the R100 she'd requested to fortify the screen of her smartphone.

Instead, she topped up the clipper with R20 and bought a ticket for the festival happening at Nyakallong Stadium in Allanridge, Free State. DJ Fantas, the promoter, has AKA and Lady Zamar on the bill, among others.

I attended Fill Up the Parking Lot when it started four years ago but clearly, I'm too old to attend this time around. I've previously accompanied her to a Justin Bieber concert at FNB Stadium in October 2014 but I was not the only parent on Bieber duty that night.

How I was forced to tsipa and do the walk of shame.
Lifestyle
3 years ago

Now she's 16 and my presence is clearly not welcomed. I could behave like my late grandfather and stymie her excursion although I know and she knows that I always bend over to her wishes. Last Black Friday she dragged me to the Northgate mall to buy her a smartphone, which she claimed wouldn't cost more than a grand.

I was hobbling on crutches when we went from store to store comparing prices because the damn thing was priced at more than R4000. I was on the verge of tears when she said she would settle for a cheaper brand, and I finally relented and bought her the phone.

I've never been kissed the way she pecked me inside Edgars that day. The joy on her face was priceless and worth every penny. Now this bloody festival is on the horizon and I'm mortified. She's asked me for R200 pocket money for snacks but I'm terrified it might go to buy alcohol although I've never noticed any predilection for alcohol.

Oh, there's also the matter of the branded takkies she wants for the festival and, unlike during my youth, they now cost more than R800.

In the meantime, I've bought myself a Ninja suit and a pair of binoculars because I intend to scale the wall at that stadium and monitor her from a distance. I know this sounds overboard but in a country where women are molested on a daily basis, I cannot take any chances. Men Are Trash but this father will not let his daughter navigate the jungle alone.