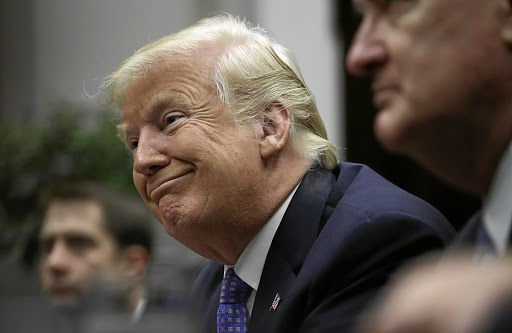 The writer says South Africa's economy is not immune to US President Donald Trump's misguided protectionist tariffs on steel and aluminium that he has unilaterally imposed.
Image: Win McNamee/Getty Images

Donald Trump is at it again. The Apprentice is reportedly miffed with the governing ANC's policy to expropriate land without compensation.

He has tasked his foreign affairs minister Mike Pompeo to study the ANC's decision and the "large-scale killing of farmers".

We should be worried.

Trump has never disguised his disdain for Africa. He once tweeted that he liked Nelson Mandela but "South Africa is a crime-ridden mess that is just waiting to explode". Last year, he called the Third World "s*** hole" countries.

Trump also created a new African country last September when he told the UN he was impressed with the health-care system of "Nambia". Nobody knew whether he had created this country by combining Zambia and Namibia given his penchant for tomfoolery.

However, whenever America takes an interest in your country, there is reason to be concerned. The US deems itself the policeman of the world and has countless times invaded countries on the flimsiest of excuses. Almost all occupiers of the White House since the end of World War 2 have started wars on foreign soil in the name of exporting their Mac-democracy. Instead, those poor countries are left mired in squalor when the CNN cameras leave town.

We need to encourage our young to venture outdoors to play in pursuit of a healthy living.
Lifestyle
3 years ago

History will also remember Barack Obama for the mess he created in Libya when he helped oust Muammar Gaddafi. The once-thriving and stable country is now a poverty-stricken enclave of rebels.

Trump is yet to start a war since becoming president; the bully in him is always itching to pull the trigger.

I wish Madiba was alive to tell Trump where to get off as he once did when he told Bush junior that he was "behaving like a madman" when he invaded Iraq without any evidence that the country had weapons of mass destruction.

A casino and hotel magnate, it is not clear when Trump took any interest in maize meal and potatoes.

There's hardly any presence of Americans tilling our land. The victims of farm murders are predominantly white Afrikaners and black farm workers but I doubt Trump cares about the violent abuse of farm hands.

America has never bothered to help any African country settle the colonial baggage. At the height of Robert Mugabe's repossession of white-owned farms, America and the West imposed sanctions that precipitated Zimbabwe's economic decline.

Our economy is not immune to Trump's misguided protectionist tariffs on steel and aluminium that he has unilaterally imposed.

Trump is yet to appoint an ambassador to Pretoria after the last one's term expired a year ago. That's just how lowly he thinks of this country.

As he keeps Mzansi in his cross hairs and takes interest in how we resolve our historical imbalances, we should consider changing the country's name just to confuse him. I doubt Trump will locate Azania even with the help of Google maps should he feel the need to direct a missile down south.