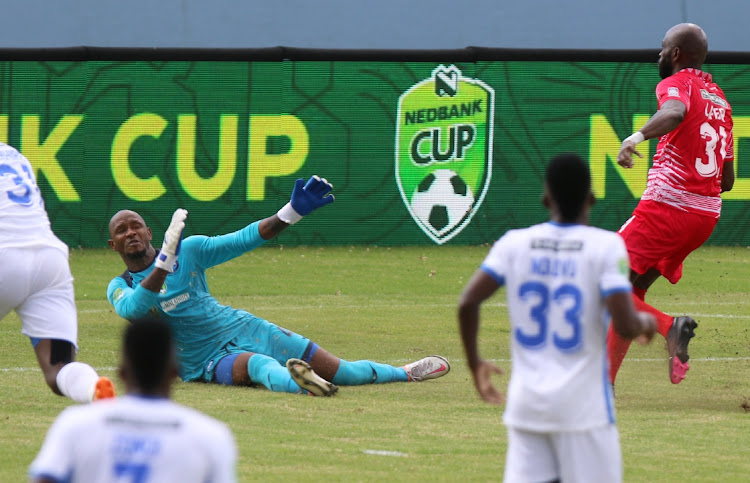 Chippa United became the first team to book their spot in the 2021 Nedbank Cup semifinals with a 2-1 win over Richards Bay FC at Sisa Dukashe Stadium in Mdantsane on Saturday afternoon.

Siyabonga Vilane scored a late consolation goal for the visitors.

Richards Bay head coach Simo Dladla admitted in the build-up that the league remained their top priority and he wasn’t bluffing, with many of his first team regulars rested for the tie.

In contrast, Chippa were taking the game very seriously and Dan Malesela named a full strength line-up with the aim of rebuilding his team’s confidence.

Chippa opened the scoring as early as the fifth minute, albeit through rather fortunate circumstance.

An attempted back-pass from Moses Mthembu was played right into the path of Laffor, who pounced on the error before finishing with aplomb.

The Natal Rich Boyz came close to finding the equaliser in the 17th minute, but Nyiko Mobbie was well positioned to deny Chigaemezu Ogbonna a tap-in at the far post after Reggy Zondi had eliminated the Chippa goalkeeper.

Chippa United coach Dan Malesela views the Nedbank Cup as an opportunity to regain confidence as his struggling charges continue to battle relegation ...
Sport
1 month ago

Despite that early scare, Chippa dominated the bulk of proceedings and deservedly doubled their lead just short of the hour mark.

Ludwe Mpakumpaku did well do save Mokhele’s initial effort, but could to nothing to stop his second.

Augustine Kwem recycled the rebound before playing it into the midfielder’s path and his toe-poke finish flew right into the corner of the net.

To their credit, Richards Bay never gave up and halved the deficit in the 90th minute.

A perfectly weighted free-kick by Bayzel Goldstone found Vilane, who nodded home past Ayanda Mtshali to make for a nervy finish to the match.

But it end, Chippa held on to book their spot in the next round.