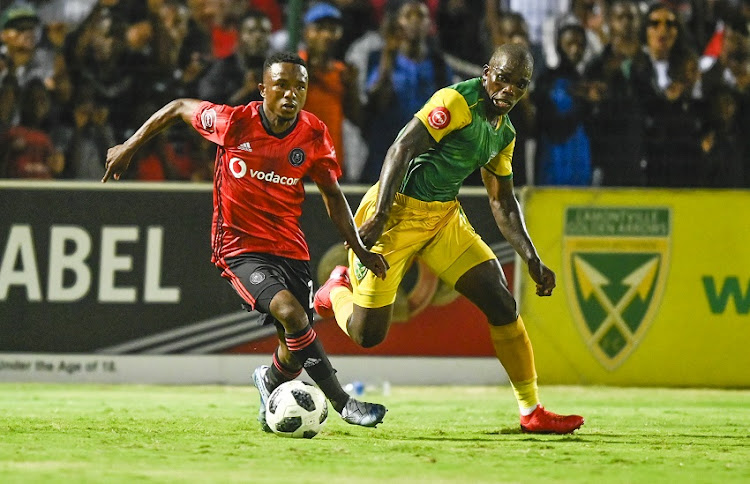 Orlando Pirates got a lucky let off late in the game but still came away with only a point at Lamontville Golden Arrows at the Sugar Ray Xulu Stadium on Saturday night as the goalless draw handed their title hopes another blow, following last weekend’s derby defeat.

The tie left Pirates still significantly behind leaders Kaizer Chiefs, who beat them last Saturday, and with only seven matches to go must now likely readjust their sights.

There was late claim for a penalty for Arrows when substitute Seth Parusnath was brought down from behind by Ntsikeleleo Nyauza but referee Jelly Chavani did not agree, to the fury of the home bench.

It looked a good shout for a spot kick but had they lost it would have been hard on an ambitious Pirates who came looking to get back onto the winning trail but were stymied by a determined Arrows’ team, who were aggressive in their defending.

The game started with an unexpected gust of wind that continued throughout the game, blowing directly from one goal to the other and handing Pirates an early advantage.

But they did not use it to good effect, much preferring to pass the ball around at pace only to be met by some tigerish tackling from their hosts.

Arrows initially were able to keep Pirates contained by pressing them with some passion but that obviously could not last long. Then they had to fight hard to keep the Bucanneers at bay as the likes of Thembinkosi Lorch, Luvuyo Memela, Vincent Pule and top scorer Gabadinho Mhango played at what looked to be 100mph.

A heavy pitch made progress difficult, however, and in the first half, Arrows’ inexperienced goalkeeper Sifiso Mlungwana was only forced into one serious save – parrying away a dipping 20th minute freekick by Vincent Pule.

A misplaced pass handed Pule and Mhango a chance seven minutes afterwards to break the deadlock but the roll of the b all and the weight of their interchanging passes conspired against them.

Arrows were restricted to just one opportunity in the first half when Ben Motshwari’s error put Lerato Lamola in the clear, but he dithered in his decision making and very quickly saw his window of opportunity closed.

After the break, Arrows suddenly burst into life with a quick counter attack that saw Knox Mutizwa burst away only to be caught by Bucs skipper Happy Jele, who showed his quality as he tracked back to block the Zimbabwean’s effort.

It gave them much-needed confidence and allowed them to begin to match Pirates in the midfield battles and to look to attack themselves.

They were much better in the closing stages and might well have secured a shock win, only to be denied by a controversial refereeing call.