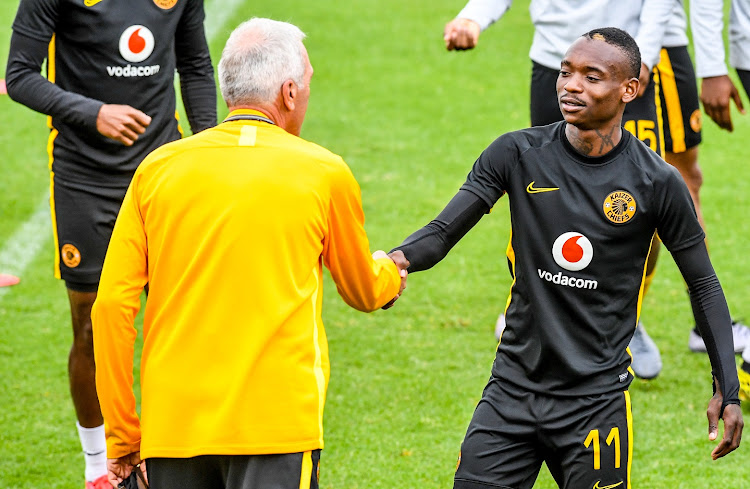 Khama Billiat of Kaizer Chiefs shakes hands with coach Ernst Middendop ahead of a training session at the Kaizer Chiefs Village in Naturena on February 19.
Image: Sydney Seshibedi/Gallo Images

Ernst Middendorp has said that playmaker Khama Billiat has been showing with his effort in training, and when he does come on, that he is “unhappy” at being used as a substitute for Kaizer Chiefs.

Chiefs coach Middendorp says there are a number of players in his squad pushing for starting places at the moment as Absa Premiership leaders Amakhosi meet AmaZulu at FNB Stadium on Saturday night.

He said Emmanuel Ntiya-Ntiya and Zambian Lazarous Kambole – yet to his the strides at Chiefs he showed at previous club Zesco United in his first season at Naturena – are among others pushing for starting places.

Billiat came on as a 59th-minute substitute for Leonardo Castro in Chiefs’ perhaps crucial 1-0 Soweto derby win against Orlando Pirates at FNB on Saturday.

“We have competition in the squad. I saw Lazarous Kambole this week [being] excellent.

“I don’t know if it is about that he needs to be on the field to get a national team call-up. He’s definitely a candidate to play.

“I think Khama is not happy with being a substitute coming into the game. And it’s good – I see it on the field too, that he’s moving.

“[Siphosakhe] Ntiya-Ntiya, other players, are really going all out during the week to make themselves available.

“And this is something that we will honour in terms of our selection.

“And [we will] not [select] because there’s a new technical team [at AmaZulu]. This is not where we have our priority in terms of our preparation.”

Chiefs went to seven points ahead of second-placed defending champions Mamelodi Sundowns, who have a game in hand, and nine in front of third-placed Pirates with their win against the Buccaneers.

That result is sure to have energised Middendorp’s squad, who had found themselves under pressure from a mini-slump of a home league defeat against Maritzburg United and away Nedbank Cup last-16 loss on penalties against Highlands Park.