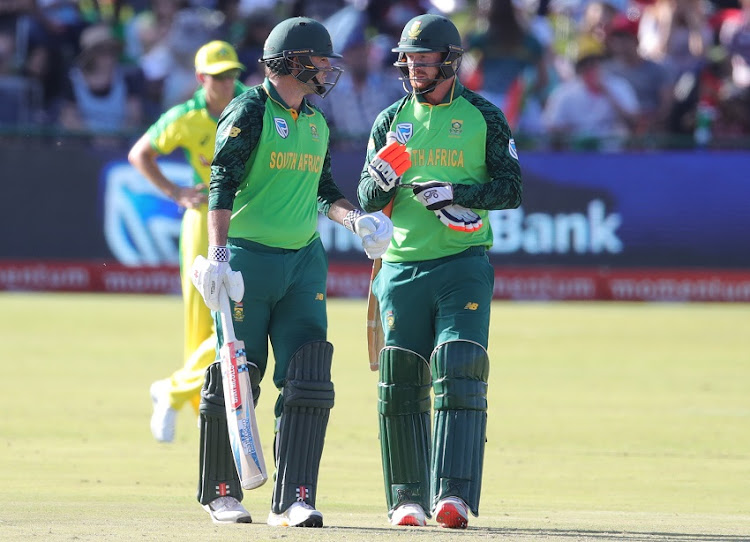 Jon-Jon Smuts and Heinrich Klaasen led the South African batting unit to put a damper on the homecoming celebrations of Marnus Labuschagne with South Africa’s six wickets victory that sealed a 3-0 series whitewash over Australia on Saturday.

Marnus left his hometown of Klerksdorp to Australia aged nine as Labuschagne and returned to the North West province with his adopted country as ‘Labushane’ to pummel his maiden ODI century in front of his extended family.

For his gallant knock of 108 that included boundaries, he made up for the disappointment of a first ball dismissal in the second match in Bloemfontein on Wednesday.

Labuschagne arrived on the crease with Australia struggling on 42/2 following the early dismissals of batting kingpins David Warner (4) and Steve Smith (20) and he helped his team to a below-par score of 254/7.

He was also part of two useful partnerships of 81 and 53 with D’Arcy Short and Mitchell Marsh respectively as they rebuild the innings in the middle overs.

When he was bowled out by Anrich Nortje with the penultimate ball, he had made a mark on this game and he was applauded by the capacity Senwes Park crowd.

His efforts were not enough to see the Aussies over the line as the Proteas needed 46 overs to reach the 255 target they needed for victory with Smuts sparkling with well constructed score of 84.

South Africa’s chase started on shacky ground as they lost openers Quinton de Kock (26) and Janneman Malan (23) early on after they failed to convert their starts.

Their blushes were saved by a useful partnership of 96 runs between Smuts and Kyle Verreynne who steadied the ship.

Their stand was broken in the 28th over when Verreynne, who scored his maiden ODI half century, was caught by Labuschagne off the bowling of Adam Zampa.

Smuts continued and he was part of another good partnership of 79 with Heinrich Klaasen before he was bowled by Jhye Richardson and caught by Warner in the closing stages.

Klaasen (68), who scored his third half century, and David Miller (3) guided SA to the finishing line and they ensured that they will leave for India for a three match ODI series on Sunday with momentum.

South African bowlers did a sterling job up front after De Kock won the toss and elected to field first with Smuts and Nortje taking two each, debutant Daryn Dupavillon and Andile Phehlukwayo one apiece.