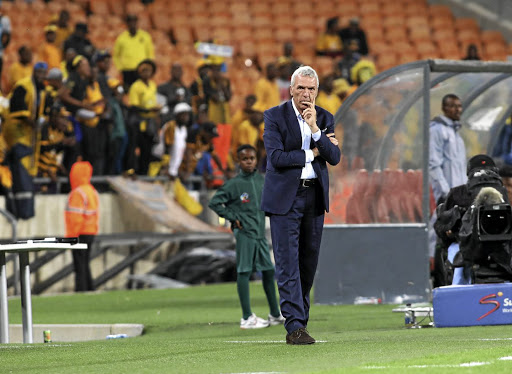 Kaizer Chiefs coach Ernst Middendorp has indicated he could reinstate Khama Billiat, Siphosakhe Ntiya-Ntiya and Lazarous Kambole to the starting XI when they face AmaZulu at FNB Stadium tomorrow (8.15pm).

In their last match, a 1-0 victory over Orlando Pirates, Billiat came off the bench midway through the second half, while Ntiya-Ntiya was an unused sub. Kambole wasn't even in the match day squad.

Speaking at the media open-day at their headquarters in Naturena yesterday, a relaxed Middendorp gave a big hint he may start Billiat, Ntiya-Ntiya and Kambole tomorrow, saying the trio have been giving their all at training.

"We have competition inside [the team]. Kambole this week [has been] excellent. I don't know if he needs to be on the field to get a national team call-up, he's definitely a candidate [to play against AmaZulu]. just to give you a little bit of the inside info," said Middendorp.

"I think Khama is not happy coming as a sub [against Pirates], good I can see it on the field here at training that he's moving. Ntiya-Ntiya. and other players are really going all out to make themselves available; this is something what we'll honour in terms of our selection."

Middendorp feels facing AmaZulu in the wake of suspending their coach Jozef Vukusic can be tricky.

With Ayanda Dlamini, assisted by Moeneeb Josephs now in charge, the Chiefs coach expects Usuthu's quintet of Lehlohonolo Majoro, Jabulani Ncobeni, Michael Morton, Thembela Sikhakhane and Nhlanhla Vilakazi to return to the fold as they were suspended under Vukusic.

"A new technical team is responsible for putting something together, it makes it a bit more difficult for us [to analyse them]. what they are doing [about] that five suspended players? Are they back into it? Michael Morton, Vilakazi, JB [Ncobeni] Sikhakhane and so on," stated Middendorp.

Middendorp also confirmed his midfield strongman Willard Katsande will return at the start of next month. The Chiefs coach hopes new signing Anthony Akumu will step up to the plate. Katsande hurt the ligament in the inner part of his right knee against Bucs last Saturday.