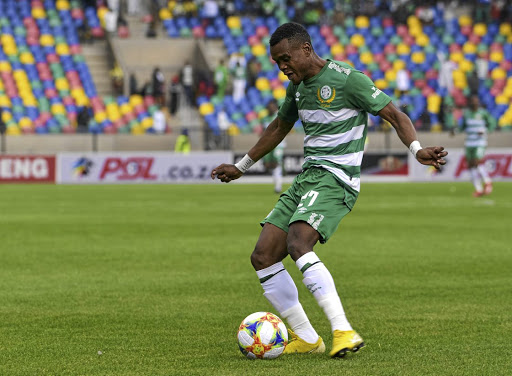 Harris Tchilimbou of Bloemfontein Celtic netted the late winner for his side in their Nedbank Cup round of 16 clash against Maritzburg United on Saturday.
Image: Frikkie Kapp/BackpagePix

Bloemfontein Celtic coach Lehlohonolo Seema believes their Nedbank Cup round of 16 victory over Maritzburg United on Saturday will go a long way in getting their league campaign back on track.

Celtic dispatched high-flying Maritzburg 3-2 to progress to the last eight of the Ke Yona Cup at Dr Molemela Stadium at the weekend.

It was Harris Tchillimbou's 94th-minute goal that sealed the deal for Phunya Sele Sele after the Team of Choice had made it 2-2 via Kwanda Mngonyama in the last seconds of regulation time.

Maritzburg had drawn first blood through Thabiso Kutumela in the first half but Tumelo Njoti grabbed the equaliser a few minutes later. Maloisane Ramasimong put Celtic ahead four minutes past the hour-mark.

The win for the Free State-based outfit came on the back of successive league defeats away to Highlands Park and Mamelodi Sundowns.

"This is a massive win for us, especially after our disappointing trip to Gauteng where we lost to Highlands and Sundowns.

"It was very important to get a win.

"Losing three games consecutively can cause a lot of panic. So I think this win will also help us turn things around in the league," Seema told Sowetan yesterday.

Celtic happy to go back to 'slaughter house'

Home is where the heart is, and Bloemfontein Celtic can't wait to return to their place of comfort after a terrible week away.
Sport
1 year ago

"Beating a tough team like Maritzburg brought back confidence to say 'look, we can beat anyone in this league'.

"I strongly feel that this performance will transfer to the league because we are not entirely safe from relegation.

While insisting that their approach was to take one game at a time, the Bloem Celtic mentor reckons they deserve to win the Nedbank Cup.

"We can't be thinking too far ahead and get carried away, but it would be nice to end this season with a cup... the way we've been playing I think we deserve to get something, I mean this Nedbank Cup," said Seema.

On Friday, Black Leopards saw off Amavarara 2-0 at home to make the quarter-
finals.