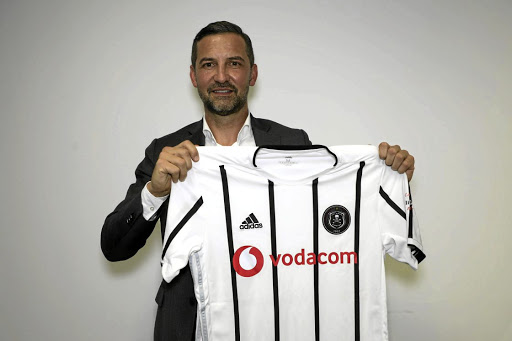 New Orlando Pirates coach Josef Zinnbauer's mandate will be to achieve what six men before him failed to do, which is to deliver a trophy to the Buccaneers.

Pirates' dramatic season took yet another twist yesterday as the German was announced as the new coach four months after Milutin "Micho" Sredojevic abandoned the Sea Robbers ship.

Since winning the Nedbank Cup in 2014 under Vladimir Vermezovic, Pirates have seen six coaches come and go.

Mokwena, who was interim coach for 16 games, returns to his role as assistant.

Legendary former Bucs midfielder Benedict Vilakazi was at a loss for words after yet another abrupt change in the coaching reins at the club.

In a shock announcement made out of the blue‚ Orlando Pirates have appointed a new head coach‚ 49-year-old German Josef Zinnbauer.
Sport
2 years ago

"I don't know what to say. It's difficult for me to comment because we don't really know much about the (new) coach," Vilakazi felt.

"It is a surprise to me that someone new has been appointed so we will just have to see how it goes."

Vilakazi feels that Mokwena will learn from the experience he gained as the caretaker and will become even better.

"Rulani is still a young coach and it's good that he will remain with the team. I think maybe he needs to get a few more years of experience under his belt; he will be alright.

"It's not easy coaching a big club like Pirates and it was the first time he was the main coach." For Mokwena it was a case of "be careful what you ask for" because things didn't go according to plan after replacing Micho.

Zinnbauer has no coaching experience in Africa and has not won a title anywhere. Nevertheless, the 49-year-old insists he is up to the task.

"I expect everyone at the club to give their best as I will give mine. It will not be easy but we will do my best to make Pirates become great again. What I can promise to the fans is to work hard with passion for this great club," Zinnbauer said in a video message.

A conspicuous lack of trophies will be the first talking point for sceptical South African football fans when 49-year-old obscurely-known German ...
Sport
2 years ago

Orlando Pirates have been conceding goals at an alarming rate this season but coach Rulani Mokwena is not pressing the panic buttons yet.
Sport
2 years ago

Orlando Pirates have been conceding goals at an alarming rate this season but coach Rulani Mokwena is not pressing the panic buttons yet.
Sport
2 years ago
Next Article