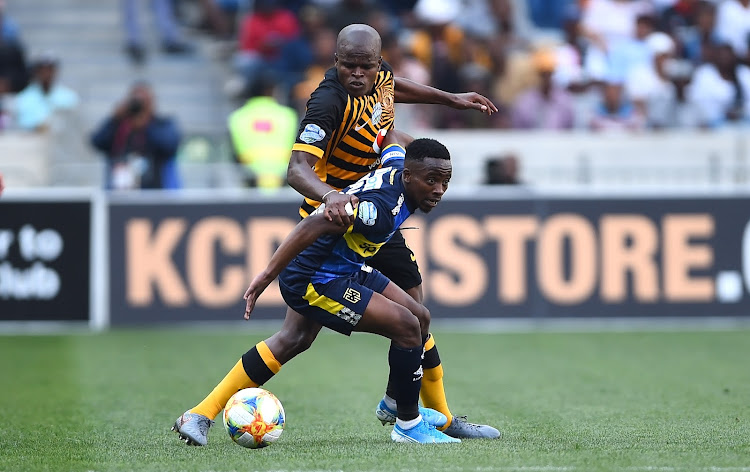 Thabo Nodada shields the ball from his marker during an Absa Premiership match.
Image: BackpagePix

The Goal of the Month award might seem small beer in the greater scheme of things in the Premier Soccer League but Thabo Nodada‚ the winner for September and October‚ hopes it proves a motivation for his struggling club.

Nodada was handed the trophy for the combined two month period for his stunning strike against Orlando Pirates‚ where he picked up the ball 40 yards from goal‚ went on a surging run and then unleashed a powerful shot that flew into the corner of the net.

He says it can be a catalyst for getting things going again at Cape Town City‚ struggling to find their feet this season and already having changed coaches.

“With what we’ve been going through with the team‚ with all the emotions‚ to get something like this has cheered me up and will hopefully motivate the rest of the guys to keep working and looking for the best‚” he said.

The #AbsaPrem Goal of the Month winner as voted for by YOU on https://t.co/nicmbkOQPw pic.twitter.com/ShXi5f5x2p

Under-performing City are sitting not far from the relegation zone with just two wins in 13 league games this season‚ which has also seen Benni McCarthy fired and replaced by Dutchman Jan Olde Riekerink.

Nodada is one of several players plagued by injury this season although the treatment room at City is now being cleared.

“We have more options now‚" he said.

"We have a new coach who is trying out new combinations and he has to see as early as he can every possible option he has‚ so that when we come back in January we have a settled line-up.

“At this point in time we need to get back to where we know we should be.

“It makes no sense for us to be in the position we are in with the quality that we have in our squad‚” Nodada added.

The 24-year-old Nodada has three goals this season‚ also netting a brace in a 3-3 draw at SuperSport United. The game against Pirates also ended 3-3.