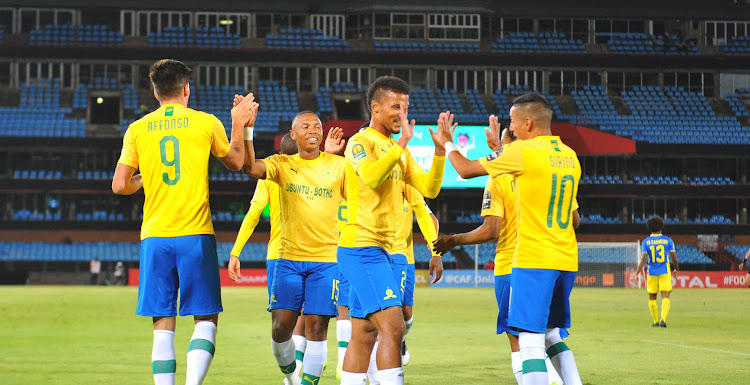 Mamelodi Sundowns were clinical if, by their lofty standards, unspectacular getting their Caf Champions League Group C campaign off to a convincing enough victory, 3-0 against Petro de Luanda at Loftus Versfeld on Saturday night.

Mauricio Affonso in the seventh minute, Motjeka Madisha in the 29th, and Sphelele Mkhulise in the 76th put the goals past the Angolan Girabola runners-up, who on Saturday night’s evidence are in for an uphill battle avoiding last place against some quality opposition in Group C.

There were a few thousands Downs fans who braved the lateness of Caf’s pathetically bureaucratic 9pm kickoff.

Sundowns did not have to break too much of a sweat, even on a muggy Pretoria evening, for a 2-0 lead by the break.

Petro did not offer any structured attack to write home about. At the back, they struggled to mark in their box.

And a team struggling to pick up players in their own area were always going to battle especially with the height of Sundowns’ big centre-forward Affonso.

It was the Downs’ Uruguayan front two who opened Petro early, Gaston Sirino looking up for a low cross played onto Affonso’s head from the right edge of the box. Affonso could direct a header from a standing position past goalkeeper Elber.

Sundowns’ second was scored as simply. Tebogo Langerman’s cross from left midfield should not have caused too many problems, but it found Madisha unmarked to easily nod past Elber.

It could have been three by the break, Lebohang Maboe’s cross deflected by Affonso’s header onto the upright.

Sundowns continued to pry openings through Petro after the break, a move of quick passes down the middle via Sphelele Mkhulise ending with Sirino slipping Affonso through, Elber collecting at the striker’s feet.

But the one-sided affair, late-night heat and the hour of the evening seemed to put even Sundowns to sleep, as they lost a fraction of concentration.

They tried to lift themselves to utilise their glut of possession, but had lost some of their sharpness in the final third.

Affonso, though, was still a threat, heading onto the crossbar in the 75th, reigniting Downs’ attack.

Mkhulise’s skills had been combining well as a third component to the understanding clearly enjoyed between Sirino and Affonso. Sirino put the winger through the on the left of the box, and, with limited time before he was closed down, Mkhulise curled a finish past Elber.